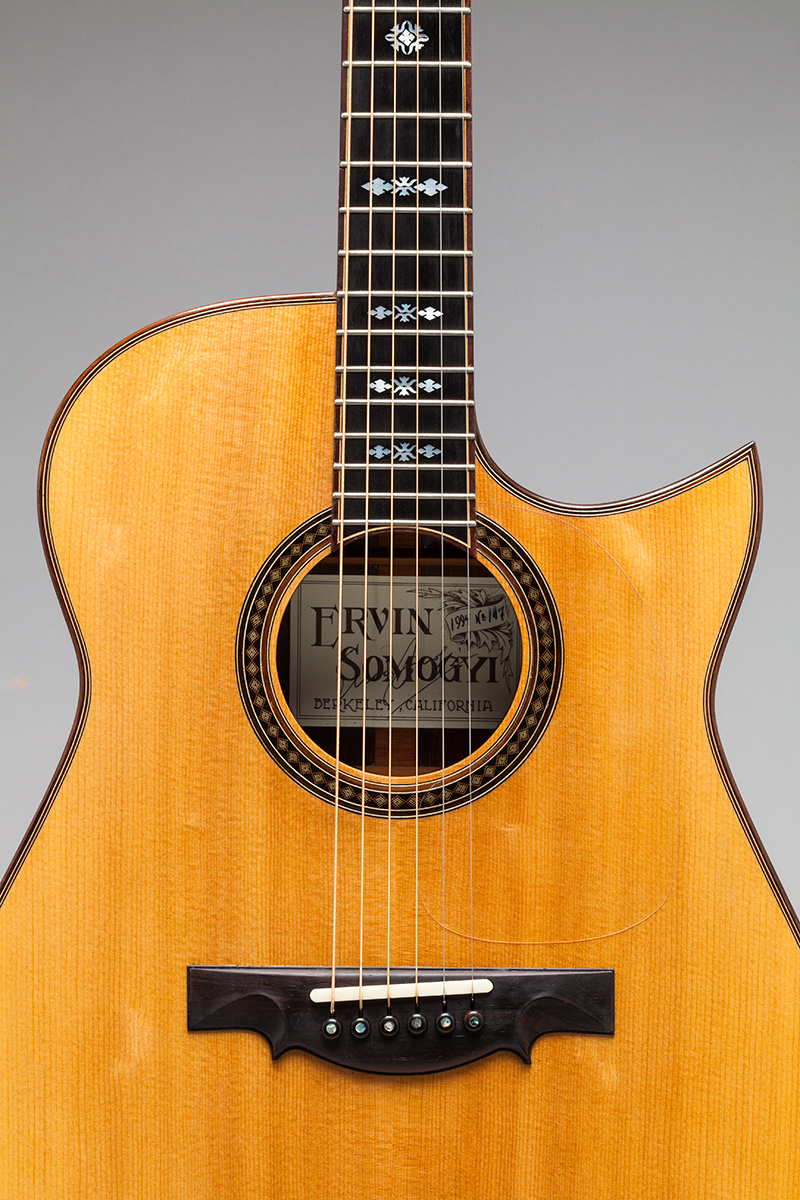 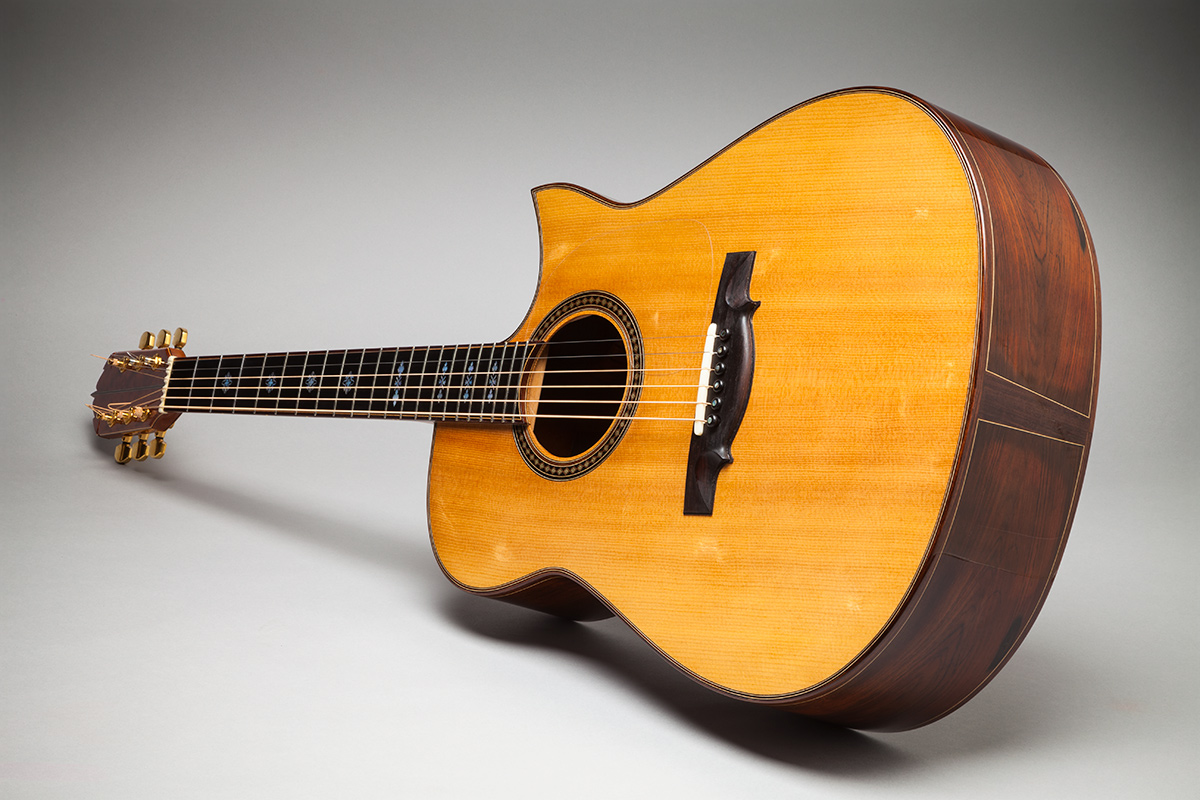 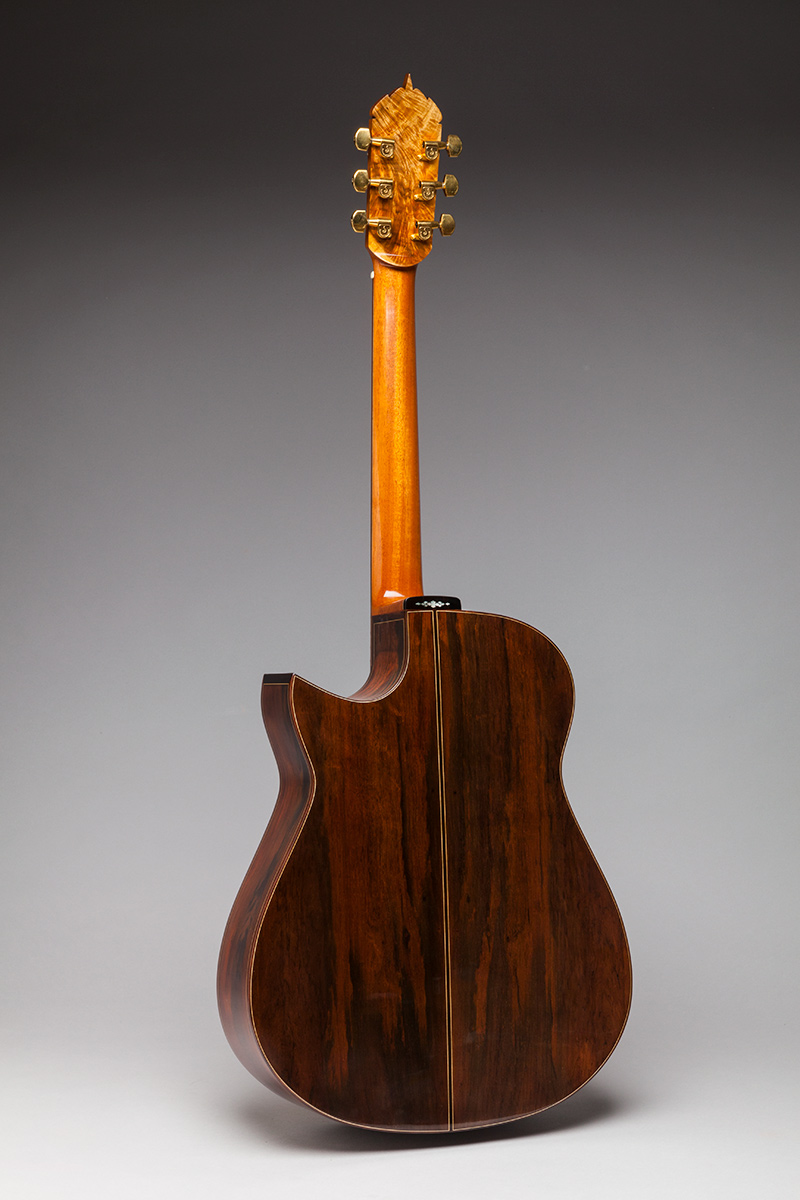 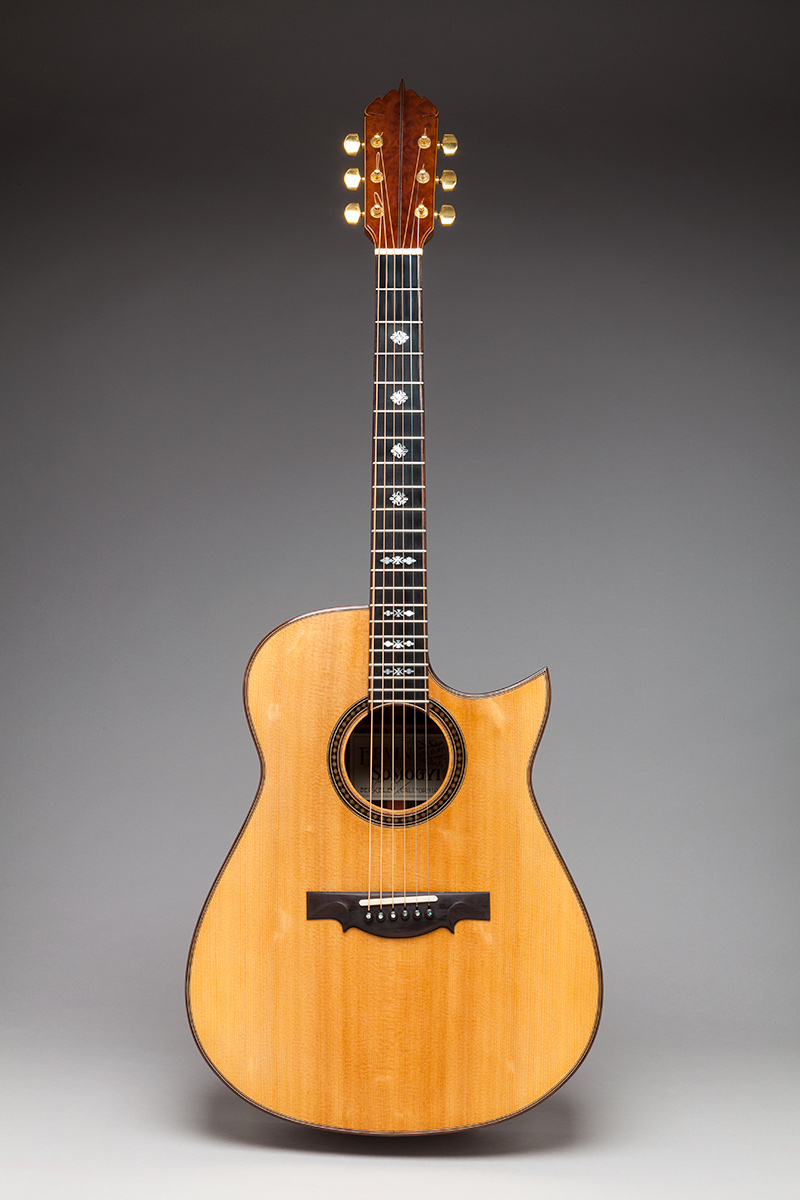 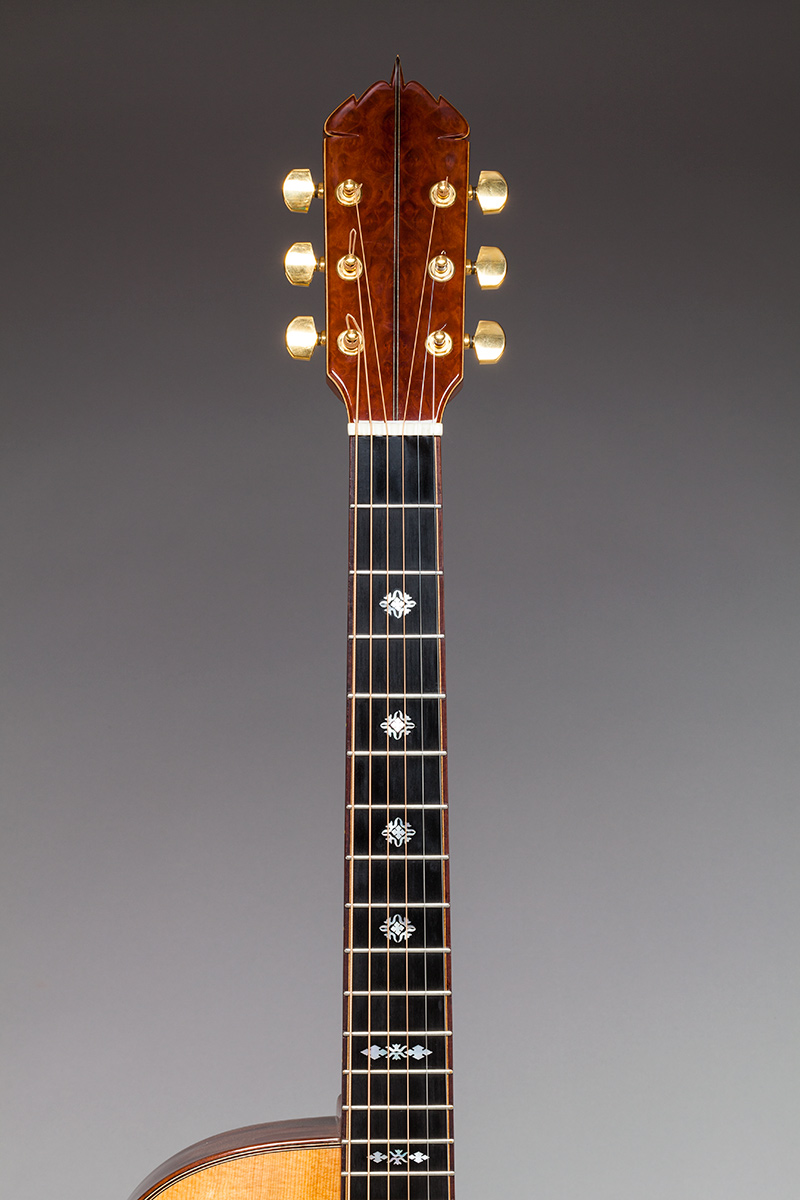 This is an M.D. Cutaway guitar, made in 1994.   I’m selling this guitar for its owner.  I’ve fully restored it, refinished it so as to eliminate any signs of wear and tear from its previous life (there was very little in any case; the instrument had been well taken care of), and given it a new look.  I’ve also done retro-voicing on it so as to improve its voice to my current standards.  It is, all in all, indistinguishable from new, but without carrying the price of a new guitar.

It has the following features:

NOTE #1:  The rosette is the traditional decorative inlay around the soundhole.  Its original job was to keep bad spirits away.  Really.  Five or six centuries ago, when wooden string instruments were first being invented and made, it was believed that devils would inhabit the dark recesses behind the soundholes.  Accordingly, beautiful designs were brought in that were thought to discourage these bad spirits from settling into the dark areas inside lutes, citterns, mandolins, theorbos, and proto-guitars.  More recently, the job of the rosette has been to beautify the instrument.  It doesn’t really do anything else; it does not affect playability, tone, projection, or sustain.

Steel string guitars tend to have simple rosettes that consist of two or three concentric circles around the soundhole.  These circles are often made of plastic, but also of wood.  In some newer and cheaper guitars the rosette is painted on, or laser-burned into the wood with C.N.C. equipment.  Spanish guitars, on the other hand, tend to be decorated with mosaic inlay rings that can be strikingly beautiful, and that take some time and effort to make.  Such rosettes frequently each contain between 3,000 and 4,000 little pieces of wood.

I’ve always thought that a good guitar should have a beautiful soundhole inlay, and I like the mosaic circle look.  This guitar has one of those.

NOTE #2:  I find the voicing of a soundbox fascinating.  There’s always something new to learn . . . depending on the size of guitar, the species of wood being worked, the specific bracing layout in question, the temperature and humidity in the room in which the work is being done, the size of the soundhole/soundport, and the qualities of tone that my customer/client has voiced a preference for.

The voicing of the soundbox is also something that I specialize in; I find myself to be an authority on it.  “Voicing work” is that series of procedures that focus on shaping the vibrating plates and their components (the braces) to the specific thicknesses, stiffnesses, profiles, tapers, etc., that will allow the instrument to have its fullest and sweetest voice.  It’s a bit like surgery combined with engineering: one needs (1) to have an idea of just where to cut, shave, taper, sand, and shape the wood, and (2) exactly how much of it to do, and (3) what it does – that is, to know what kinds of manipulations of relatively small amounts of wood will shift the sound of the instrument in this or that direction — and (4) to have a sense of having gone not far enough or having gone too far.  It’s an essential skills set that takes time to learn and master, and it is one that is not taught in any of the schools nor mentioned in any of the many how-to books that are in print . . . with one exception.  To my knowledge I’m the only author who had described these procedures in written form; they are the subject matter of chapters 18 and 19 of my book The Responsive Guitar.

Voicing work is necessarily part of structural work.  One of the most important adages in Spanish guitar making is to make the guitar so that it is “on the cusp of disaster”.  That means that it is NO STRONGER than it needs to be to hold together under string tension and the rigors of being played; and it is NO WEAKER than that either, because to make it so will ensure eventual failure (breakage or collapse).  One can understand that a soundbox that is built to that balance point will be able to vibrate and resonate as fully as possible . . . because it is not being held back by superfluous mass or stiffness . . . and that it is simultaneously strong enough to hold together.  It’s a tricky balance point to achieve.  This guitar started out farther from that balance point than it is now.

The pacing of Voicing work is rather slow.  I remove small amounts of wood from here and there, and listen to the change in tap tone that that removal produces.  I use the sounds of various types of tap tones as an indicator of how track how close to “right” the soundbox is at.  This work takes me a full day, and often two days, to do properly.  I once showed one of my clients my procedure for doing this on his guitar; he had been persistent in asking me to do this and I finally agreed — on the condition that he not photograph nor ever describe the procedures to anyone else.  Afterwards, he said it was like watching his favorite color of paint dry.

My guitars do have the reputation of sounding good, though.

NOTE #3:  The function of the cutaway on a guitar is to allow the player’s left hand easy access to the high notes on the fretboard.  Accordingly, cutaways that allow maximum reach are the best ones.  A lot of guitar cutaways only give 2 or 3 frets’ worth of clearance; this one allows almost five.

NOTE #4:  A French polish is the hand-application of a shellac finish that is at the end rubbed out to a high gloss.  It was the traditional and best finish for wood in the days before lacquers, urethanes, catalyzed and ultraviolet-cure finishes, etc., arrived on the scene.

When it comes to guitars, French polish has several advantages, and perhaps a few disadvantages.  One great advantage is that it is very thin compared with any of the other finishes that are used these days; this allows the guitar’s main diaphragms (the top and the back) maximum freedom of vibratory movement; this results in a louder and more present sound.

It is a non-toxic finish, as its solvent is alcohol.  One can dissolve the shellac flakes in either ethanol or methanol; the principal difference is that one can drink ethanol, but not methanol; the latter is poisonous.  [NOTE: Methanol itself was created during Prohibition . . . that period of time in the 1920s when Americans decided that alcohol was a tool of the Devil and needed to be abolished.  Accordingly, petrochemical impurities and additives were mixed in with ethanol so as to render it poisonous for humans to drink.  As we all know, Prohibition eventually went away; methanol did not.  The reason that we still have methanol is that the liquor industry doesn’t want its customers getting their booze from the local hardware store.]

One can sometimes see cracks in the finishes of older lacquer-coated guitars.  This is called “crazing”, and it happens because the lacquer is thick and hard enough to crack over time.  French polish is not subject to crazing. The crazing is not a problem, really; the heaviness of the lacquer is, though — as far as guitar sound is concerned.  Because of its relative heaviness, a lacquer finish will damp the sound of a guitar much more so than a French polish ever could.

One disadvantage of French polish is that, because it is so thin, it does not protect a guitar against scratches and wear as a lacquer finish does.  A French polish finish is so thin that it offers minimal protection.  However, the principal function of any finish — besides enhancing the woods that it covers — is to protect wood against changes in the weather.  Wood is hygroscopic; that is, it swells and shrinks depending on how much moisture is in the air.  That movement can promote cracking and checking in woods.  Therefore, I tell my customers that the function of a French polish is to (1) allow the instrument its full and present voice, and to protect its woods from the weather . . . but not the player.  I expect people who own my guitars to take reasonably good care of them.

Nonetheless, in case of damage, French polish is easy to touch up by anyone who knows how to work with it.  And speaking of knowing how to work with it, mastery of French polishing is a genuine skill; it takes less skill to apply lacquer onto a wooden surface with a spray gun.  Along with that, the urethane, polyurethane, and ultraviolet-cure finishes are not easy to repair in case of damage.  The entire finish has to be removed, and a new one reapplied.

There is one other thing: lacquers and the synthetics are high-gloss finishes.  They are so brightly reflective . . . even “plasticky” . . . that they typically get in the way of one’s appreciating the woods themselves; the reflectivity gets in the way.  Take a look at your own lacquered guitar and you’ll see what I mean.  A French polish is shiny but not so glossy that it gets in the way of appreciating the colors and visual depth of the woods; these look more beautiful, and have more depth, even indoors where there is artificial lighting.

MANDATORY SURGEON GENERAL’S WARNING: The sound of Somogyi’s guitars has been found to be so intoxicating that you are seriously warned to not play any of them while driving or operating heavy machinery.