There are a million ways to decorate a soundhole. My “trademark”, if there is one, has been the segmented rosette, which is an interrupted variation of the decorative inlay that normally simply encircles the soundhole.

More lately my “trademark” work has expanded into my carving artistic designs directly into the soundboard, rather than inlaying something. One nice thing about feeling free to decorate one’s guitars in new ways is that it opens up possibilities of equally enhancing other parts of the guitar — with ornamental touches that echo and support the visual aspects of the rosette. 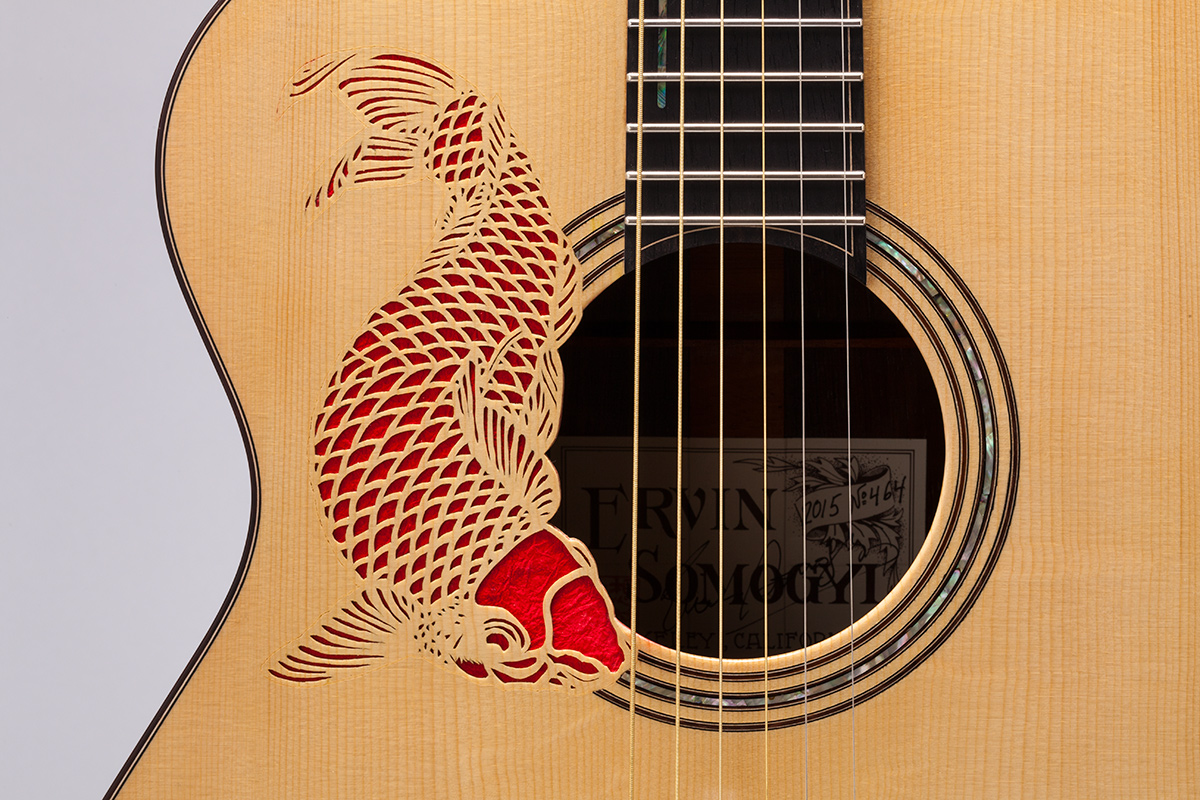 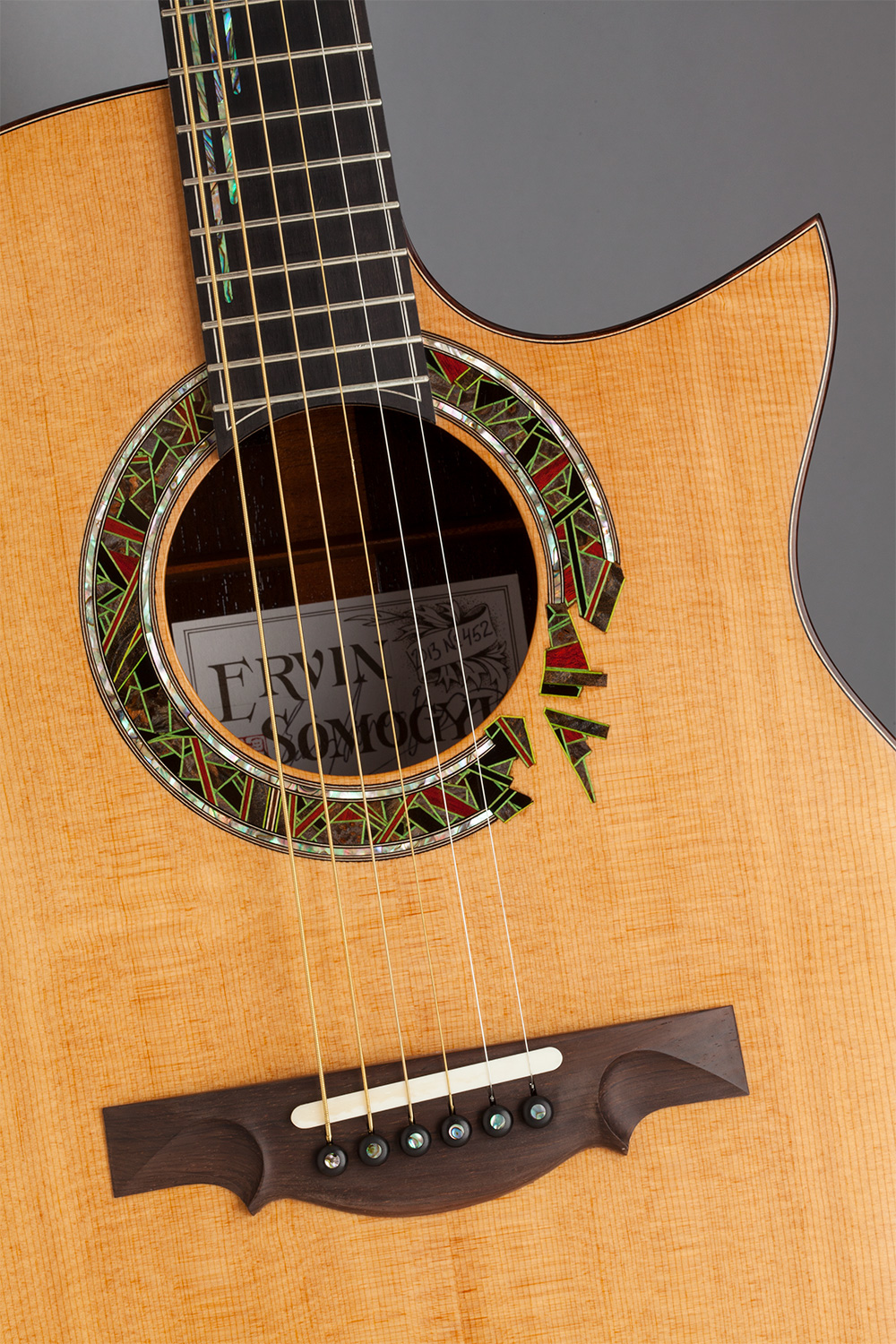 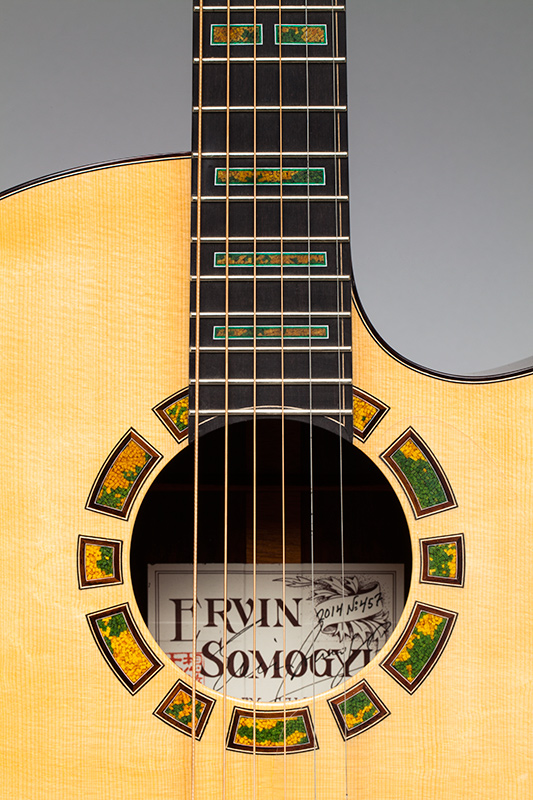 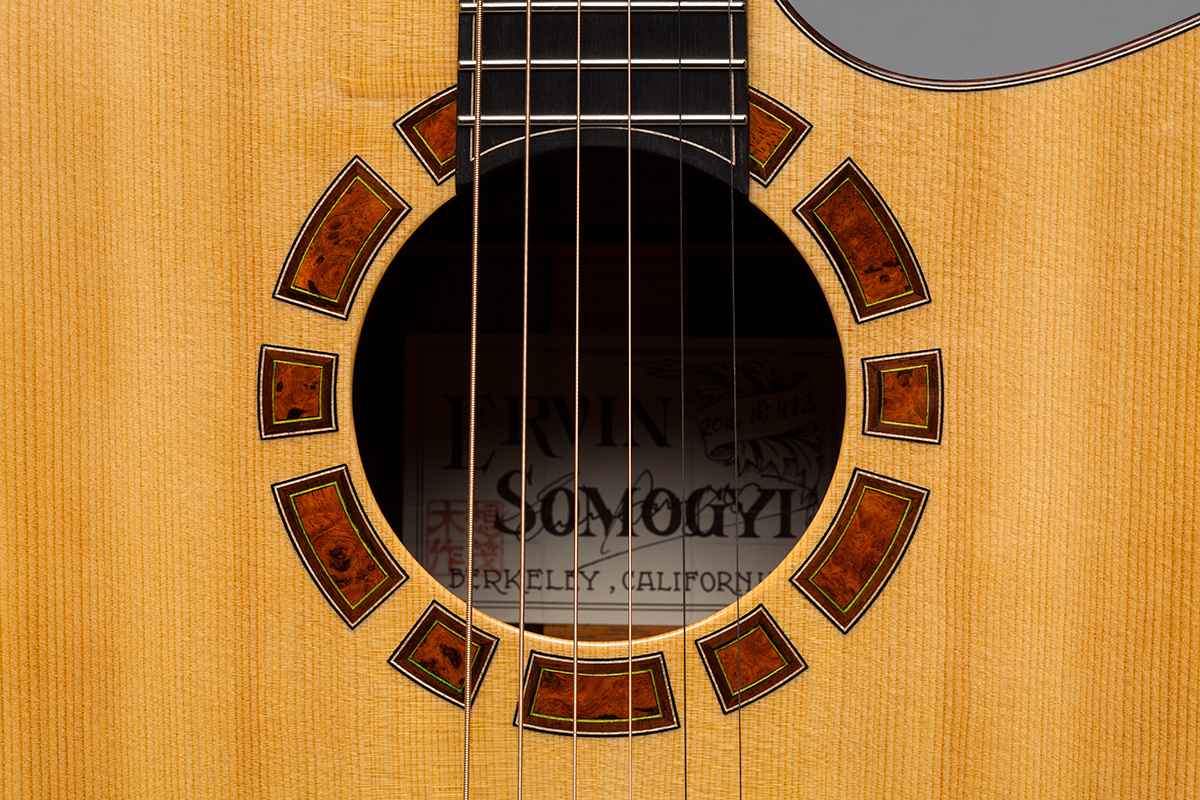 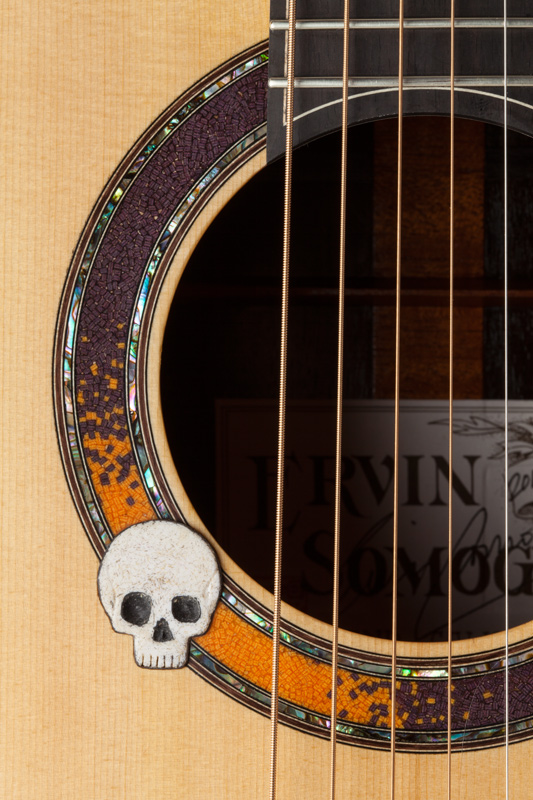 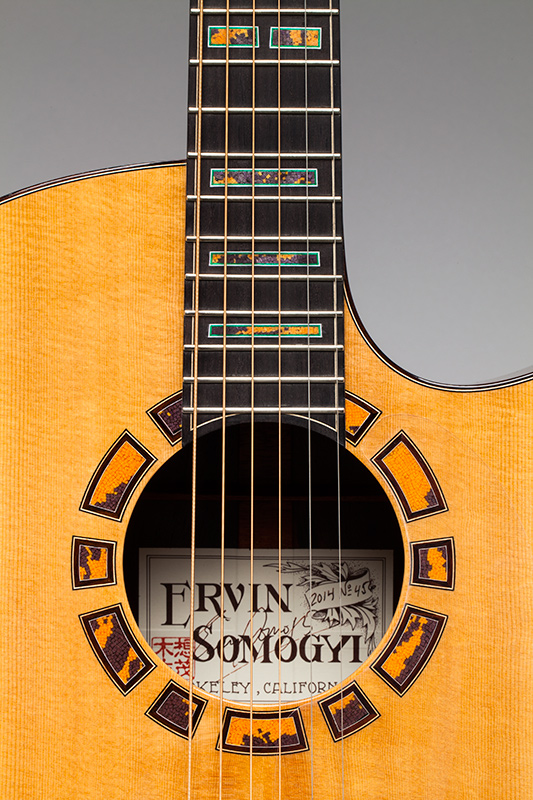 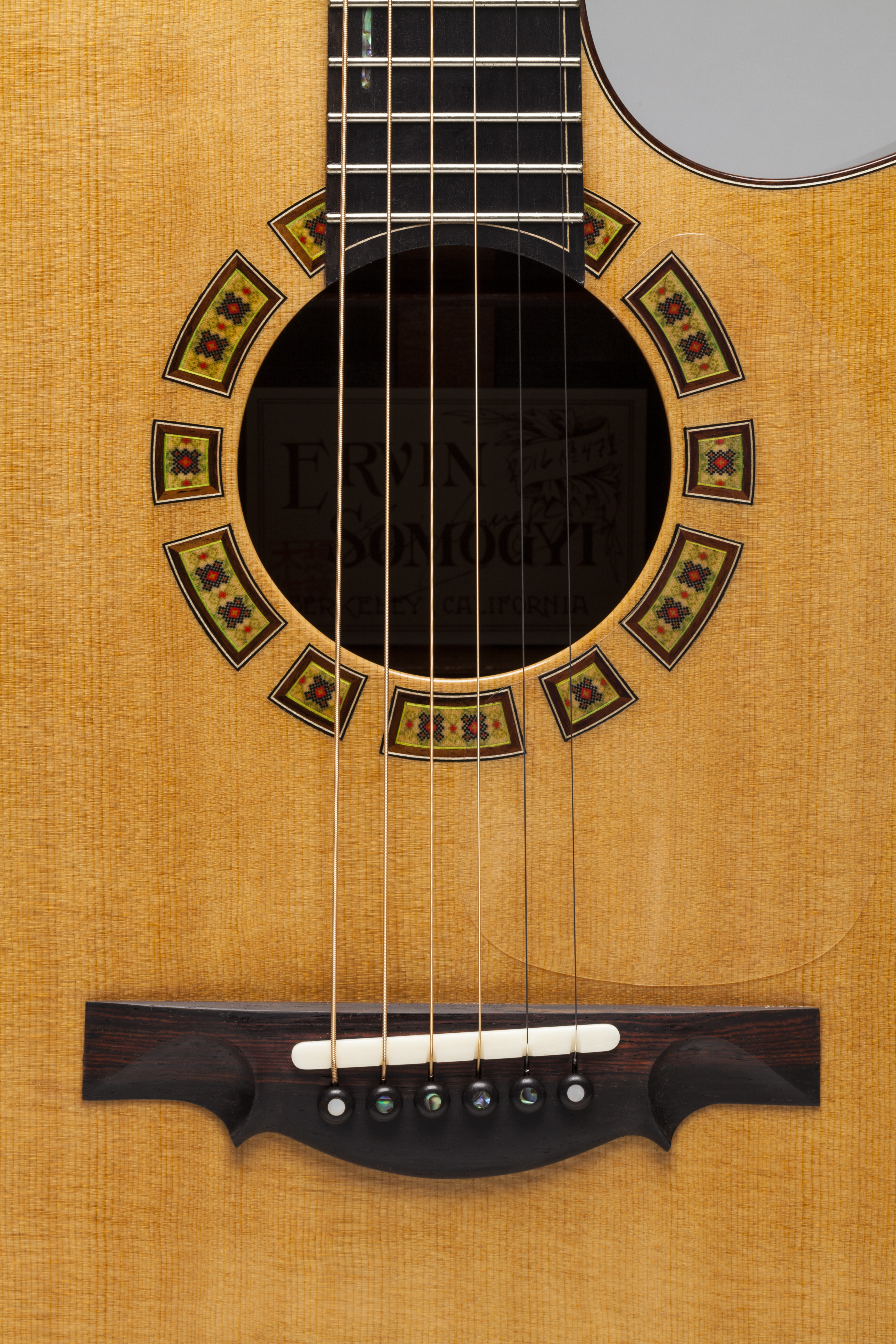 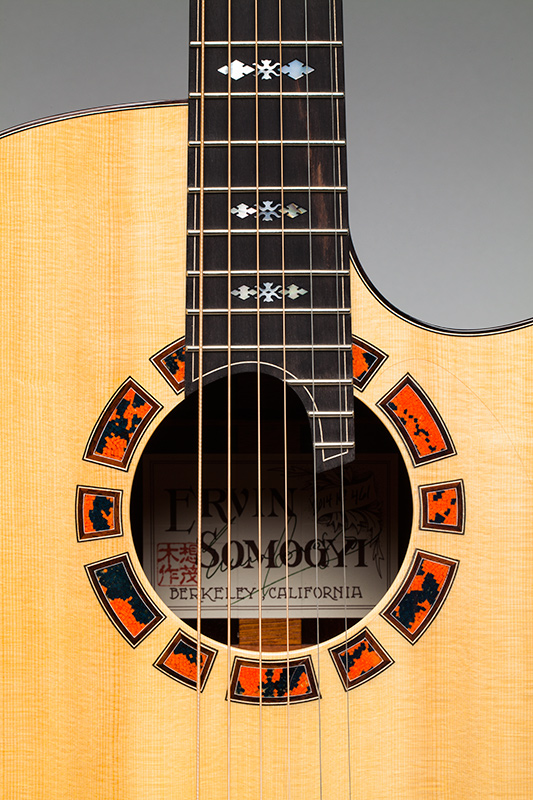 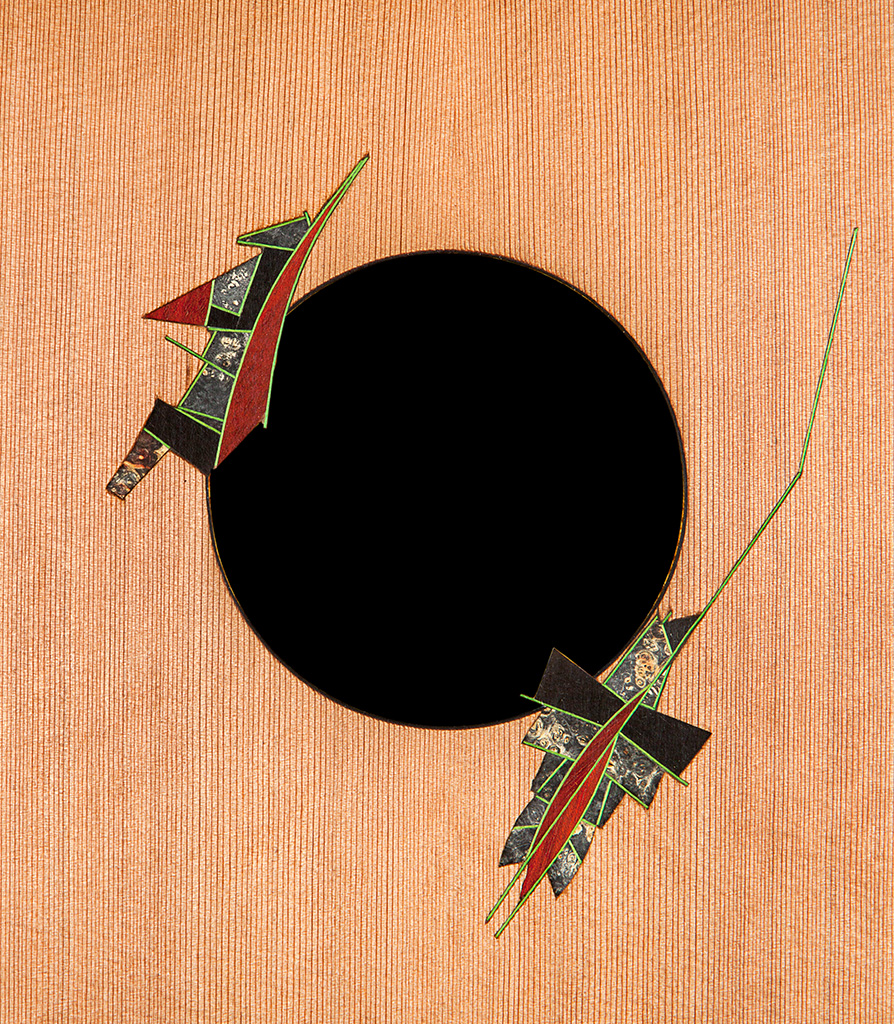 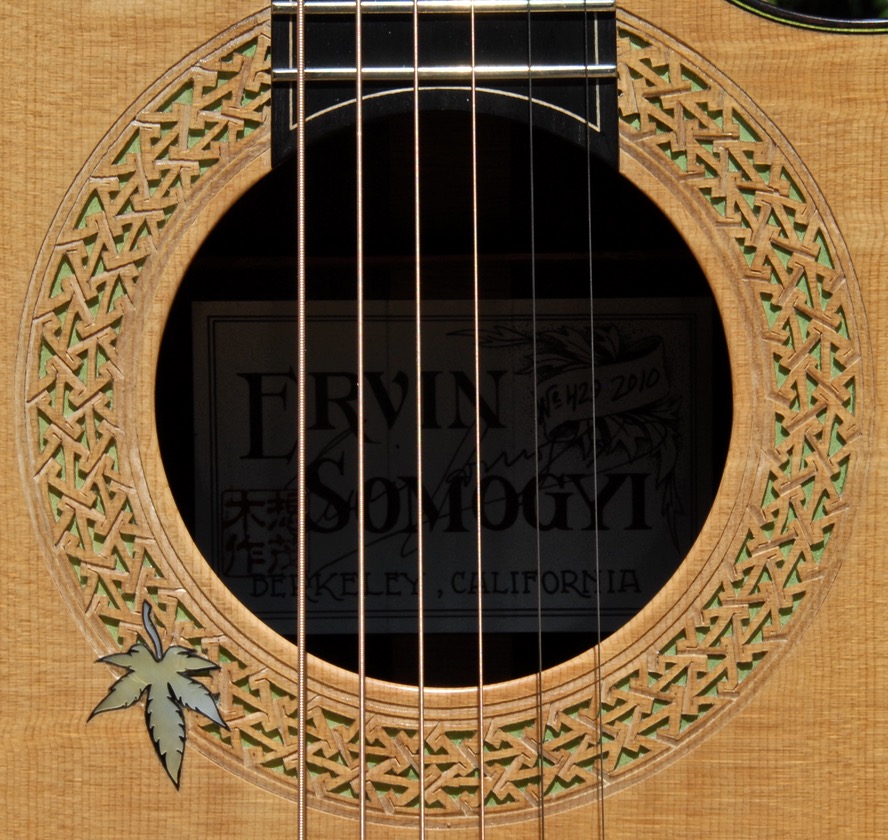 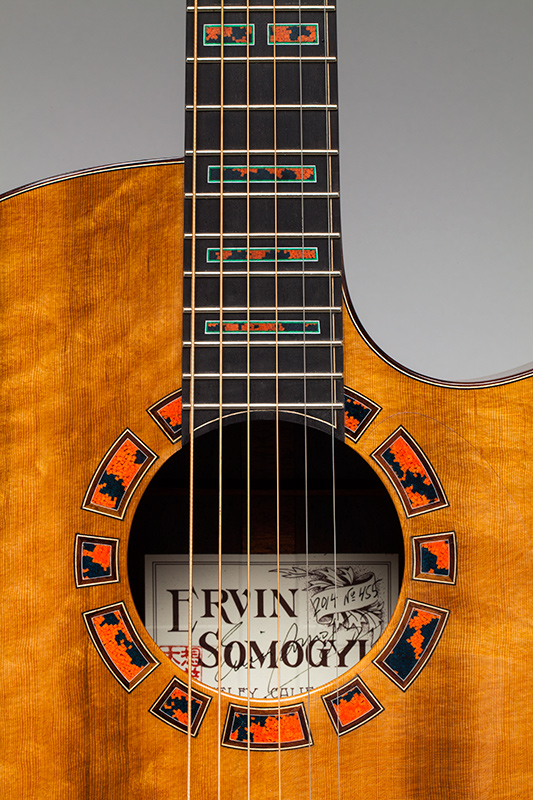 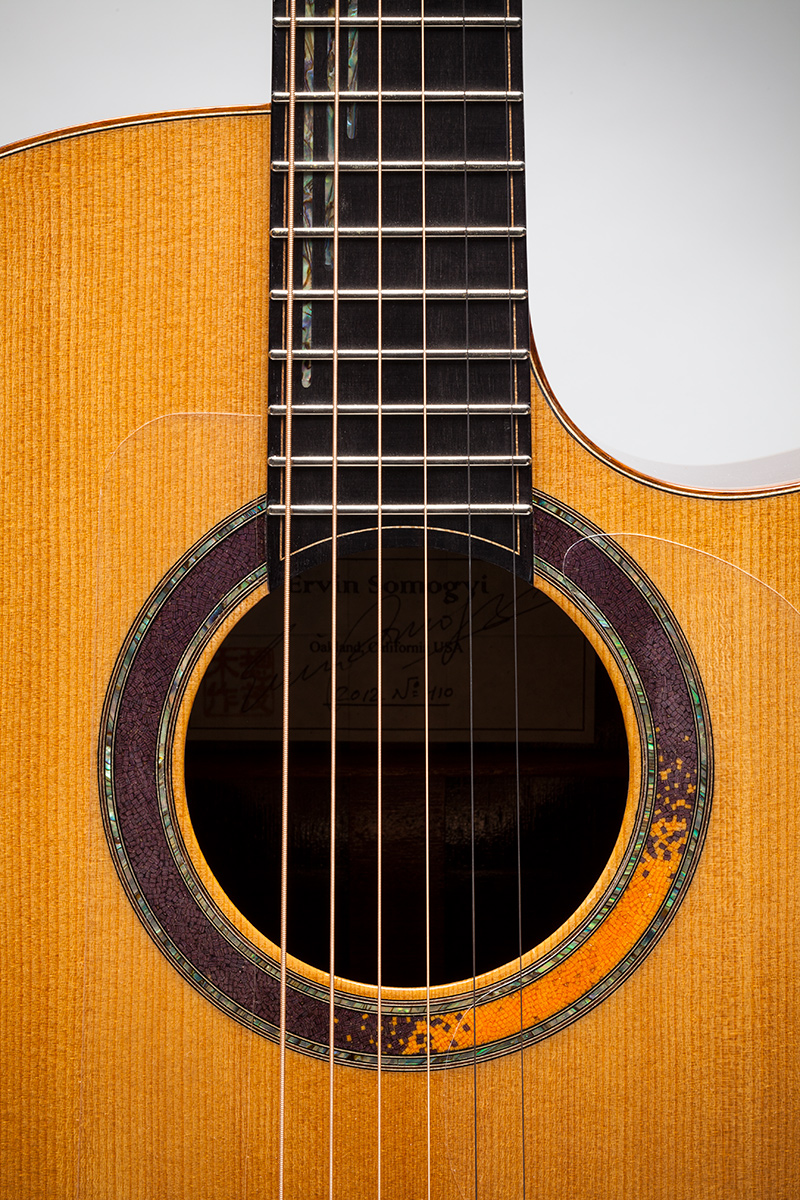 There is another rosette design that I take some pride in: the patio-stone rosette. Some years ago I landscaped my back yard. It had been an overgrown and somewhat impenetrable jungle, despite the fact that it’s really very modest in size.

I hired a crew of skilled Mexican landscapers and stone masons. They directed me to a supply yard that sold all kinds of yardwork and landscaping items: gravel, tiles, big and little stones, slate, fountains, ornamental statuary, etc. I went there and selected a kind of flat stone that had colors and texture that I liked, for purposes of becoming the new ground surface. The crew cleared the jungle, leveled the dirt, and put in plants and a new floor.

It was interesting to see them shape the stones and fit them to each other, with a bit of grout-cement in between. The work was painstakingly done, but the look of the yard that resulted was beautiful.

It occurred to me, in looking at the stone work that had been fitted together – no two pieces being the same size or shape – that such a thing would look good on a guitar as well. I made such a rosette and didn’t know what to call it . . . until it became obvious to me that since I’d copied an aesthetic of patio stones, this was my patio stone rosette. These rosettes are made individually, and painstakingly put together piece by piece; no two are alike. 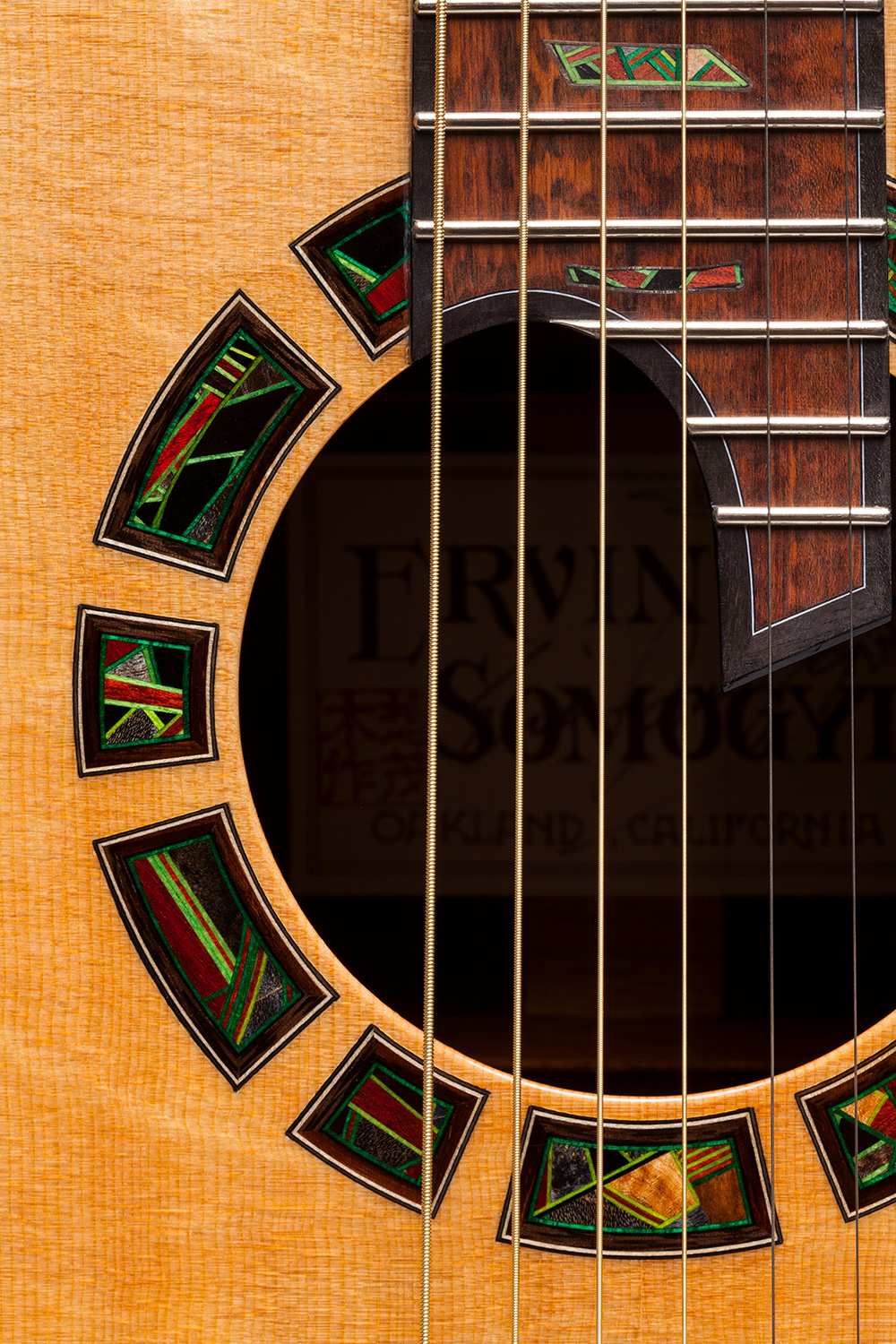 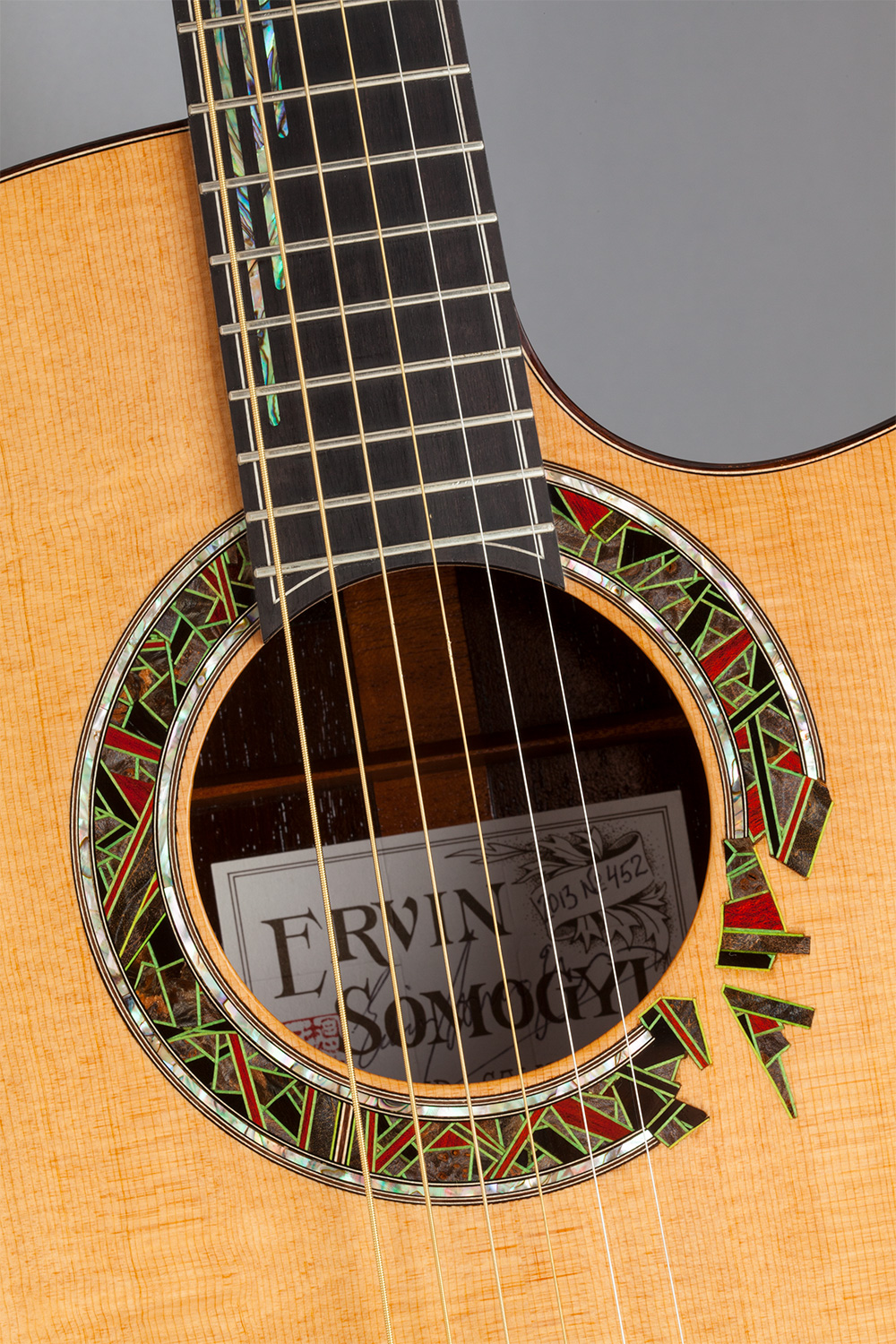 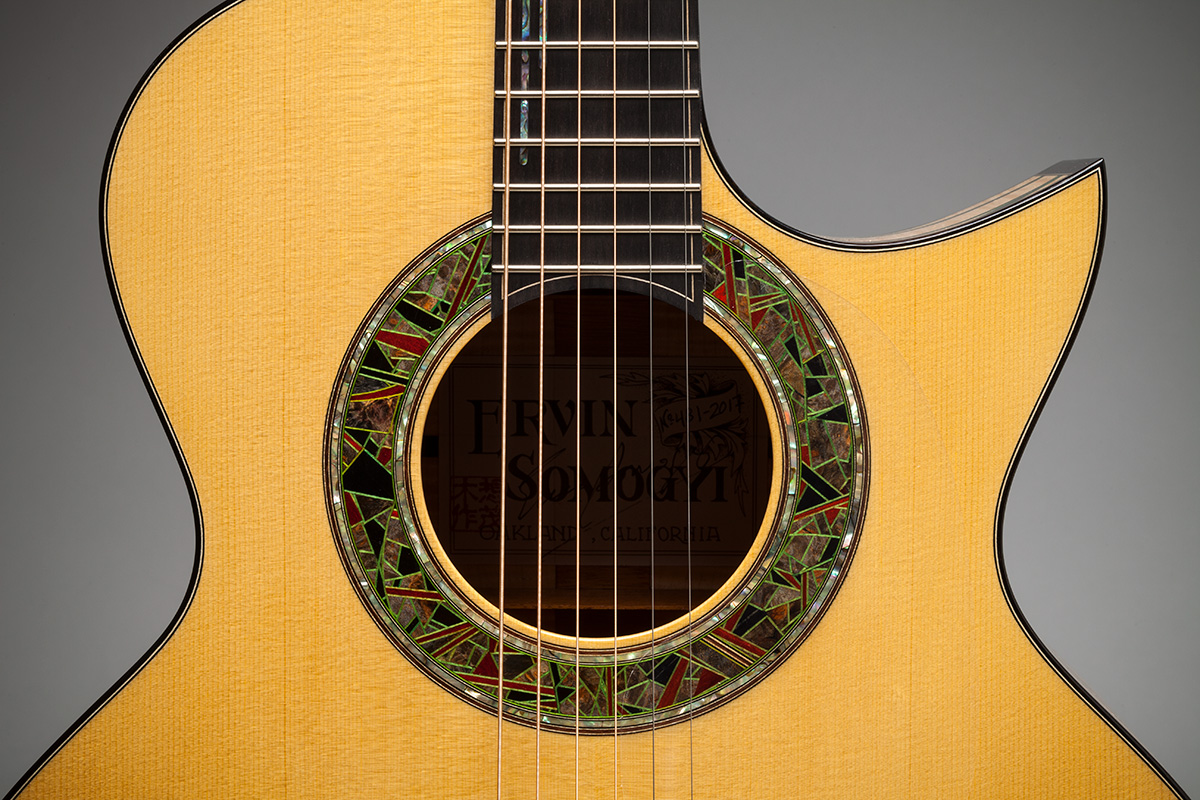