I eventually learned that what I was seeing was the end product/result of the aesthetic traditions that these guitars came from.  The steel string guitars and its shapes are American inventions.  They have come out of a Capitalist/entrepreneurial (for lack of better words) culture that is focused on efficiency in production: the factory model.  This is neither good nor bad, but it is true.

The Spanish (classical) guitar has come out of a European tradition of seeing objects with an eye to the rules of Classical Proportions — an aesthetic tradition that goes back to the Renaissance and even further back to the Greeks.  No kiddin’.  The rules of Classical Proportions are the handbook for making attractive lines, shapes, proportions, perspectives.  They include the Golden Ratio (which the Greeks discovered), and the mathematically determined looks and flow of artistic curvatures.  These rules apply equally to painting, sculpture, architecture, the designing and making of musical instruments, and anything else that one wants to make look good.  These rules draw the line that separates the factory and the craftsman.  This is not good or bad either, but it is equally true.

It’s interesting to me that my life has brought me to be making steel string guitars – because, as I said, steel string guitars have always looked a bit clunky to me.  Their usual shapes seem an awkward mix of flat spots and inconsistent curves, like a tire that can’t make up its mind as to whether it’s going flat or not.  The same classical proportionalities and lines that make women’s faces and bodies (and even statues, buildings, and constructs such as the Eiffel tower) beautiful are observed in the making of Spanish guitars.  They are ignored in most steel string guitars, however.  But then again, timeless romantic beauty is not what steel string guitars seem to have been about.  Or, one might say that one group works with largely inorganic lines, and the other with largely organic ones.

In any event, I guess I’ve tried to change some of that.  I’ve streamlined my guitars’ shapes so that their lines flow more easily and with greater beauty.  In a word, I’ve been chasing beauty at least as much as the bottom line. 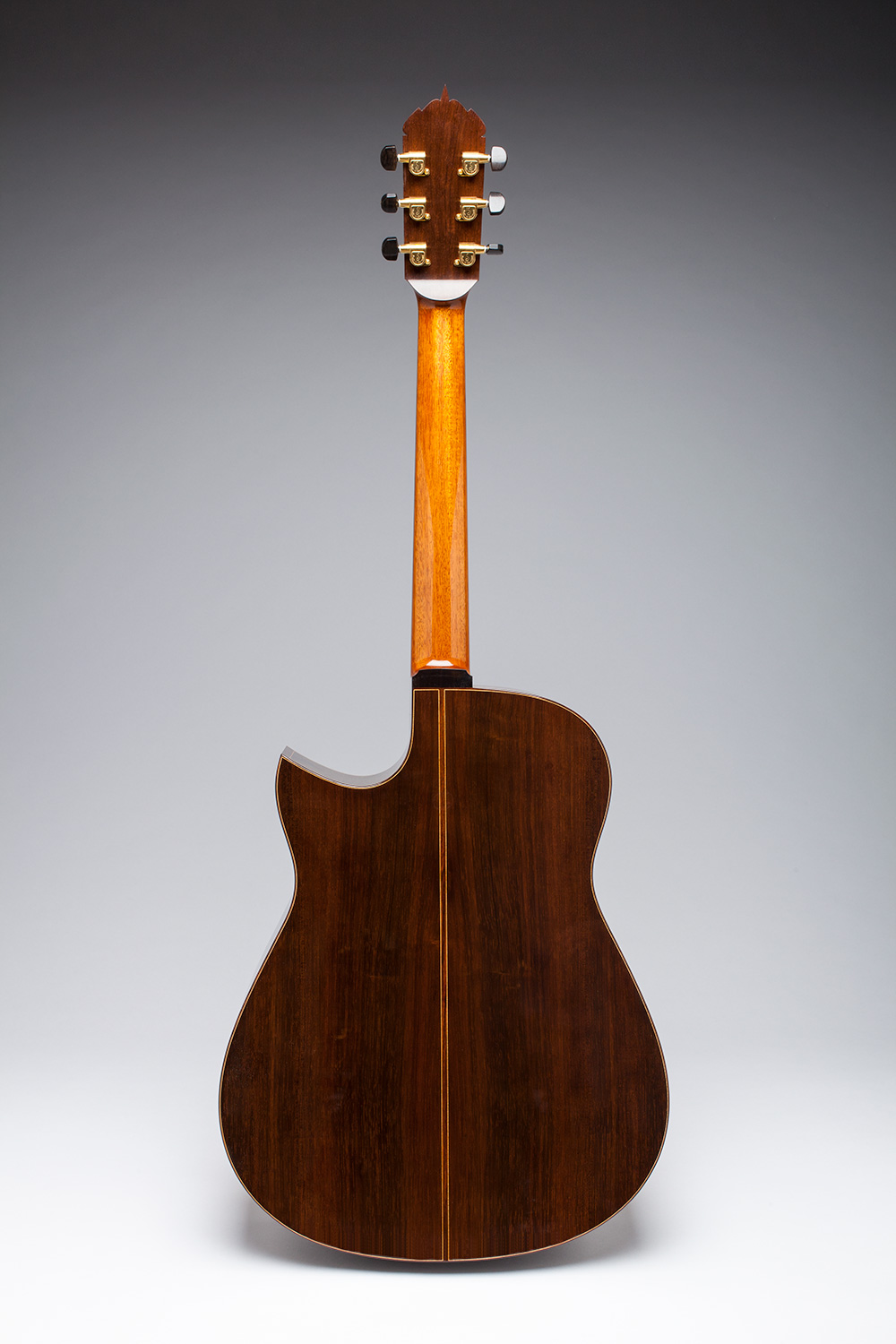 The Mod-D. or M.D. (Modified Dreadnought) is my proprietary shape; it grew out of the very traditional Martin Dreadnought guitar.  That guitar was designed for musicians who stood when they played; my version is designed for musicians who sit.  As such, it offers a waist and a better center-of-balance.  This model was furthermore invented before luthiers were calling their own models showy names like the “Shenandoah”, the “Il Padrone”, the “Grand Tetons”, etc. (these are names I’ve thought up, by the way; I don’t think anyone actually uses them).  I had modified the canonical Dreadnought guitar, and simply called it the “modified dreadnought” at the time.  The name stuck. 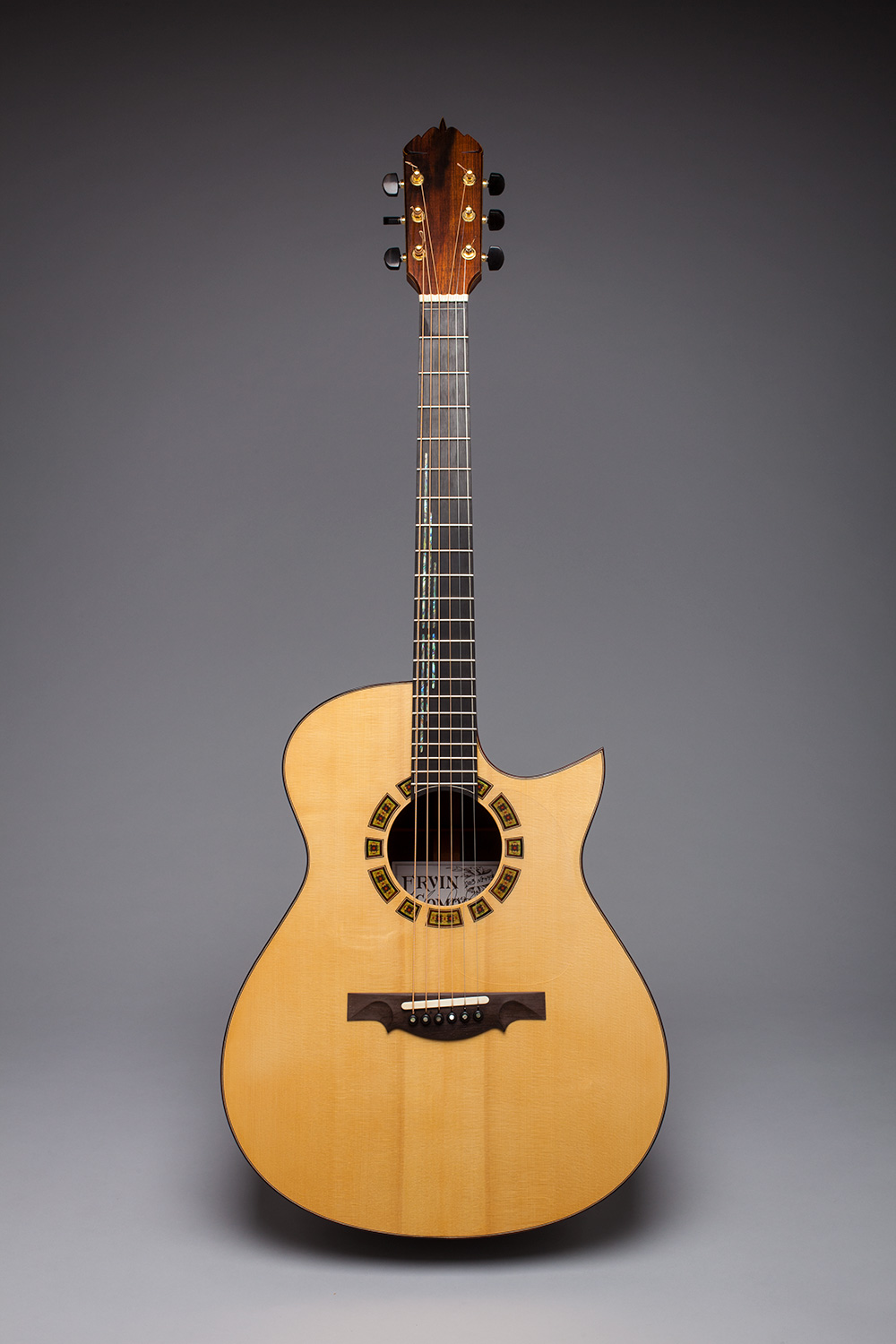 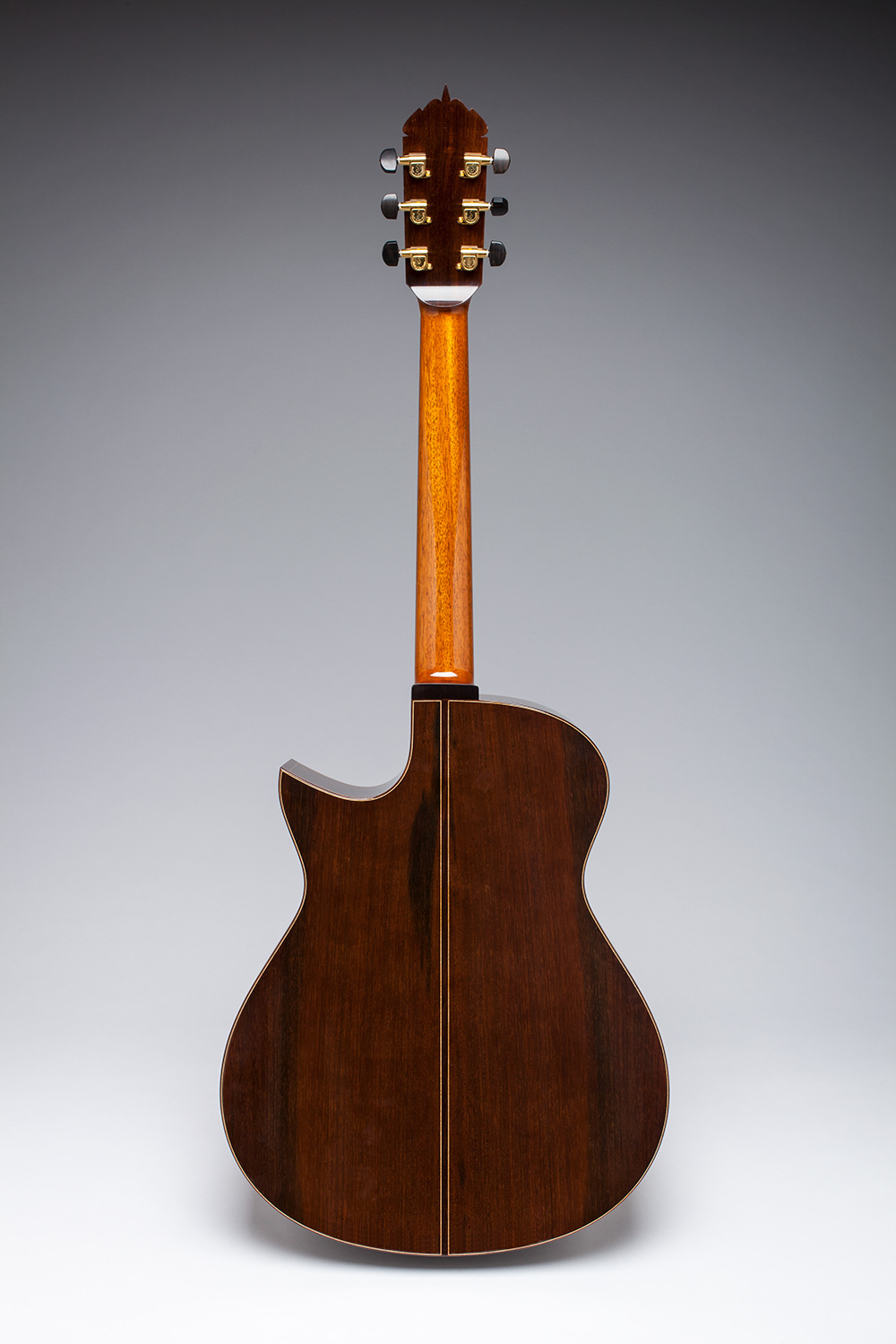 OM guitar with cutaway, back view 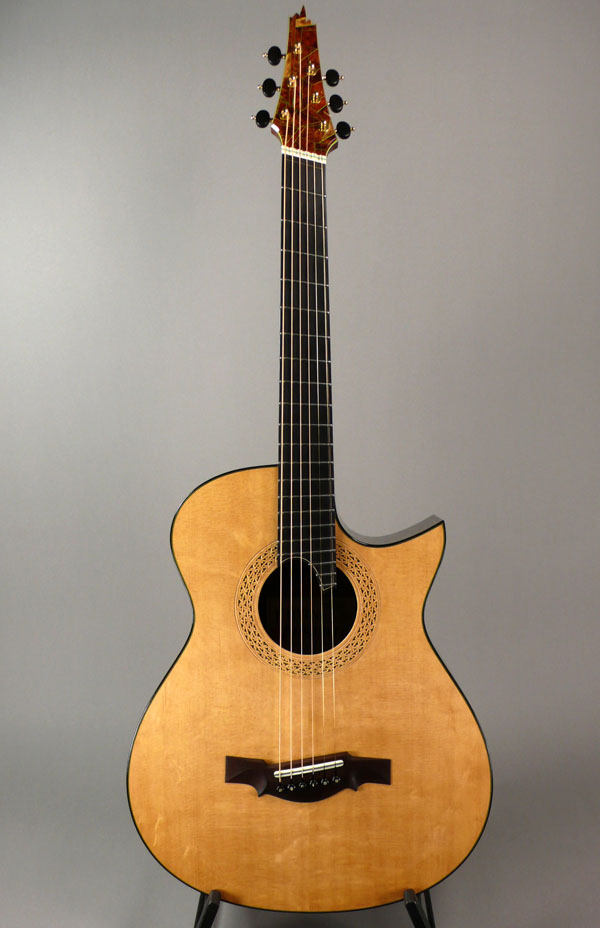 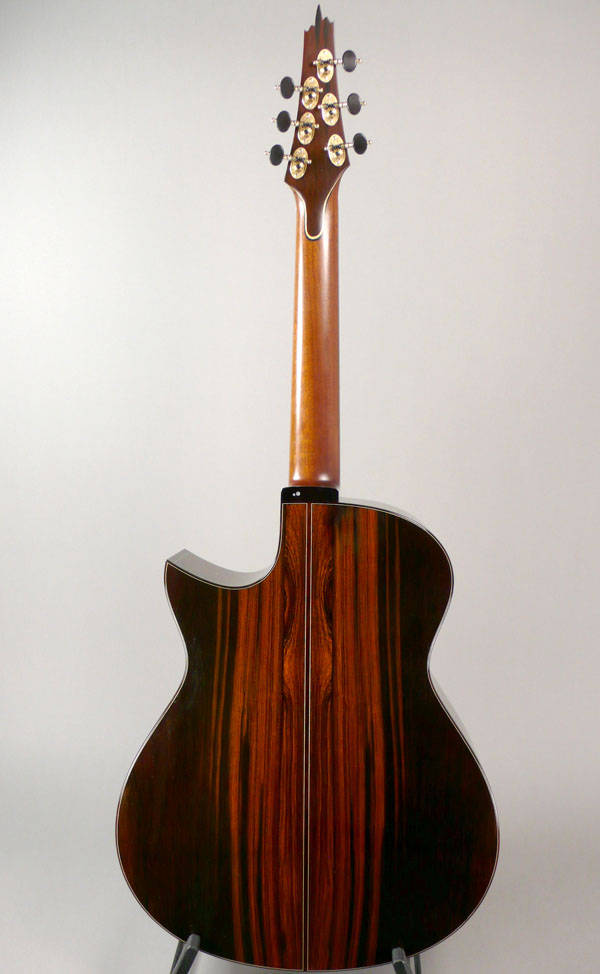 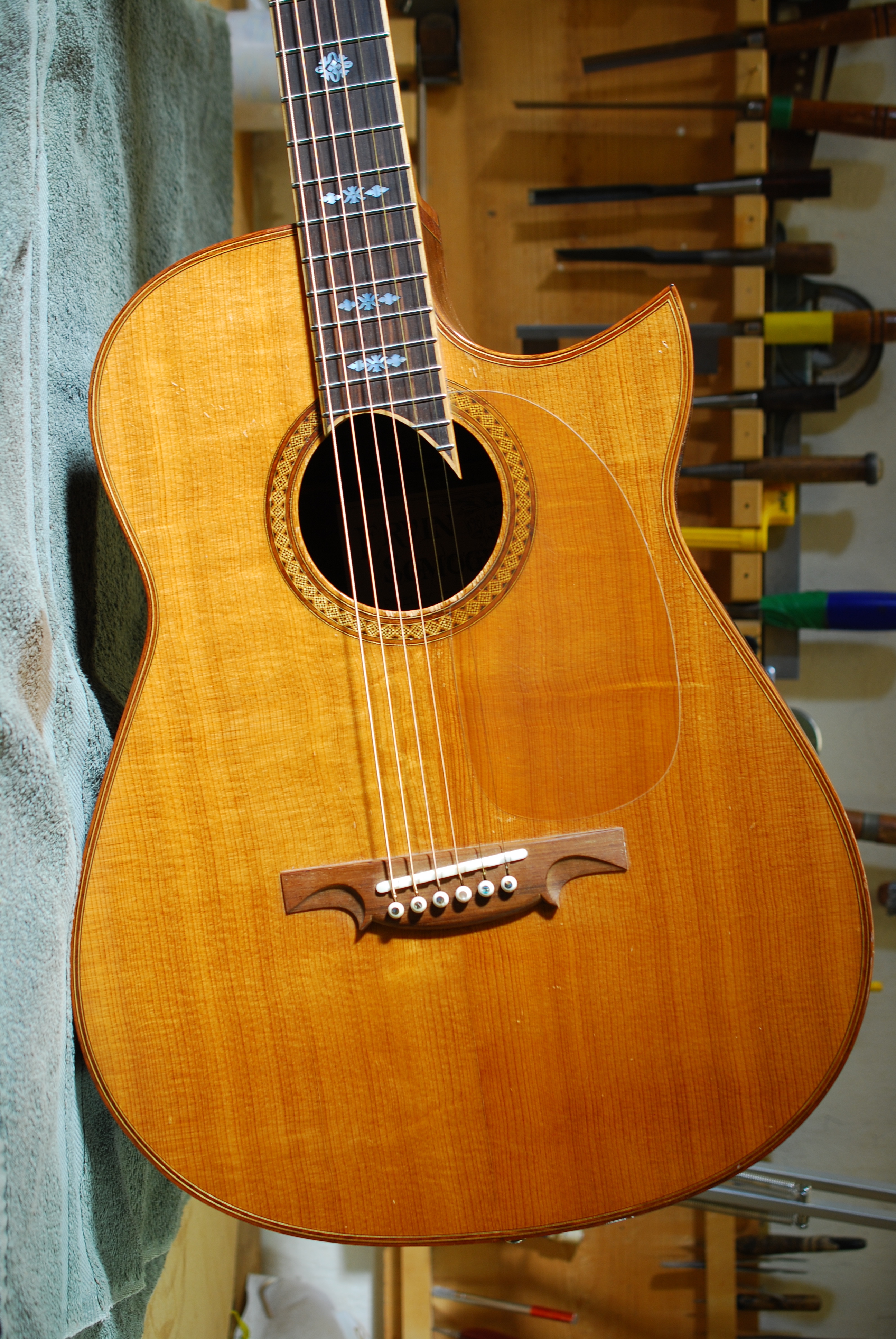 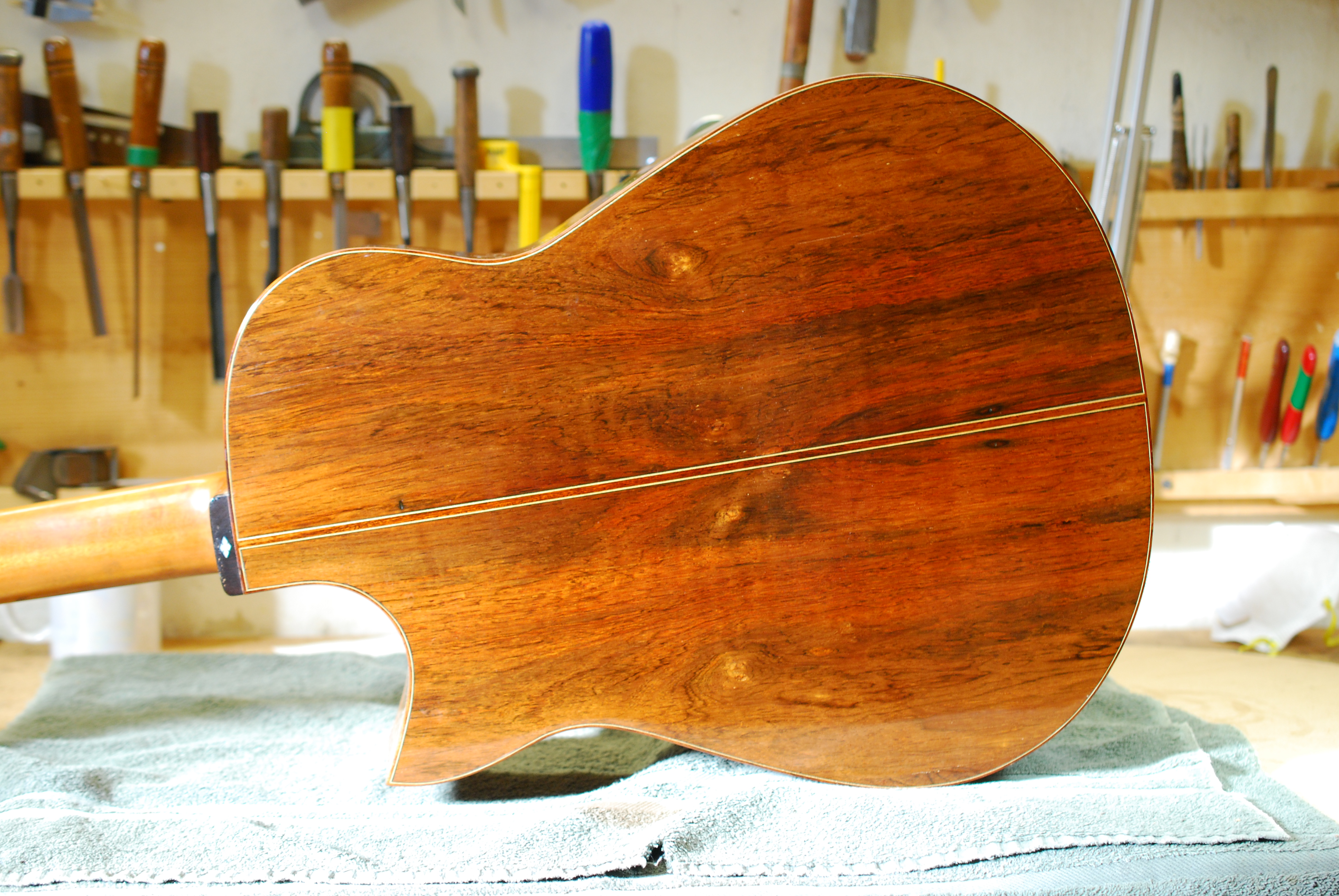 The OM and OOO models are the same, except for the fact that the former has a 14-fret neck and the latter a 12-fret neck.  This has structural and tonal implications. 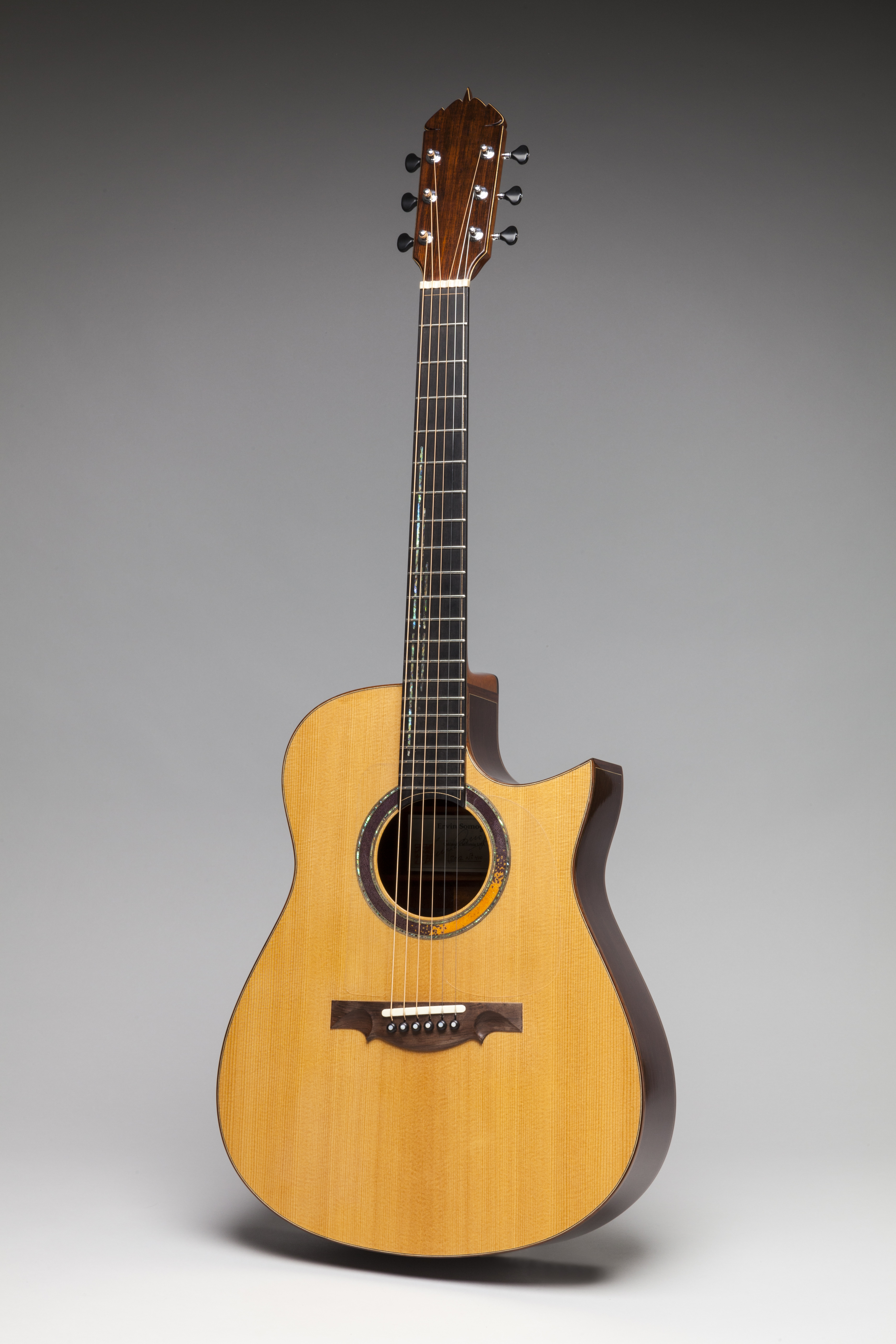 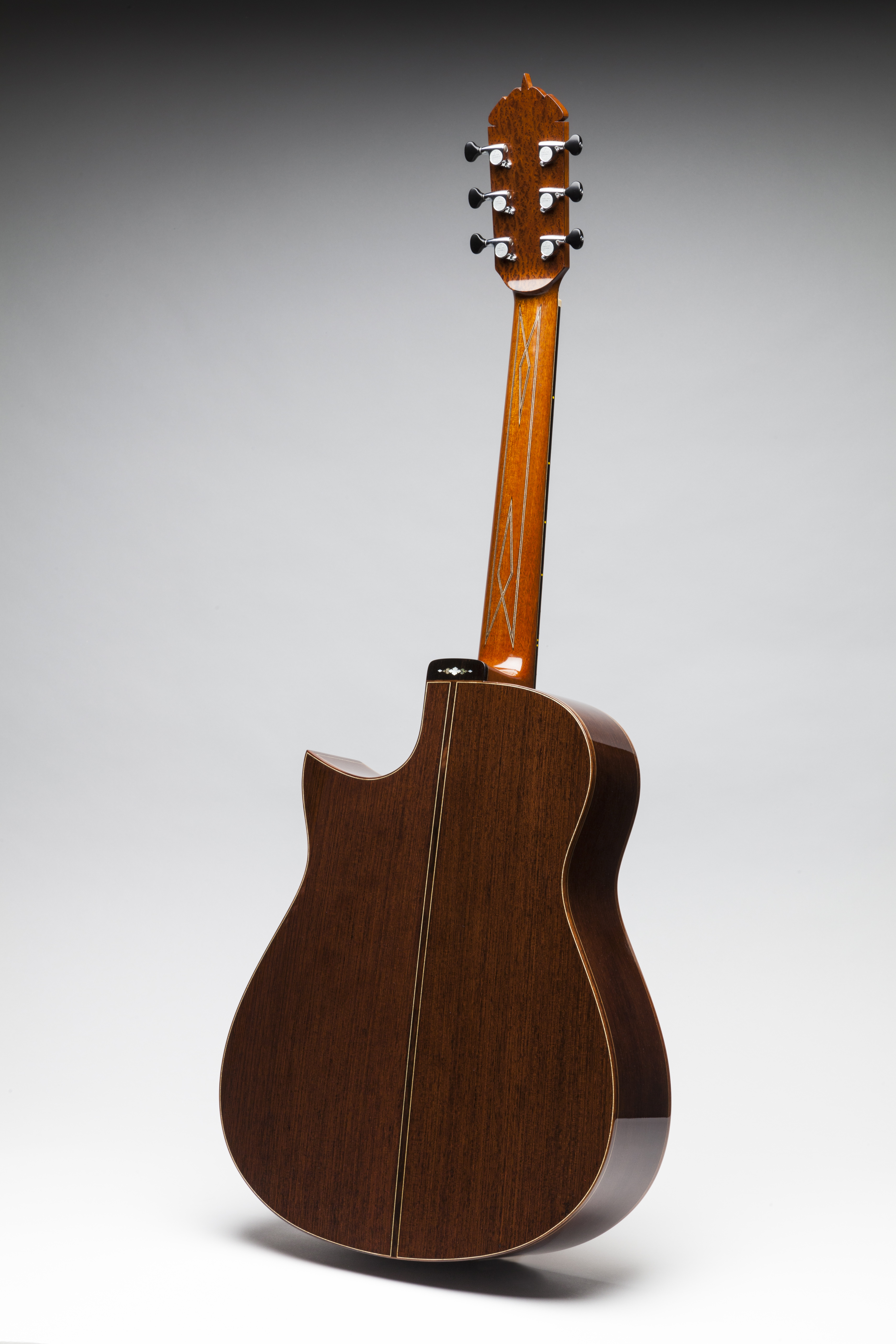 My Studio model is the same as the Mod. D., but sized down 4%.  It is between the Dreadnought and the OM models in size, and very comfortable for people who like a bit of a smaller-bodied guitar.  It can be made in both 12- and 14-fret versions. 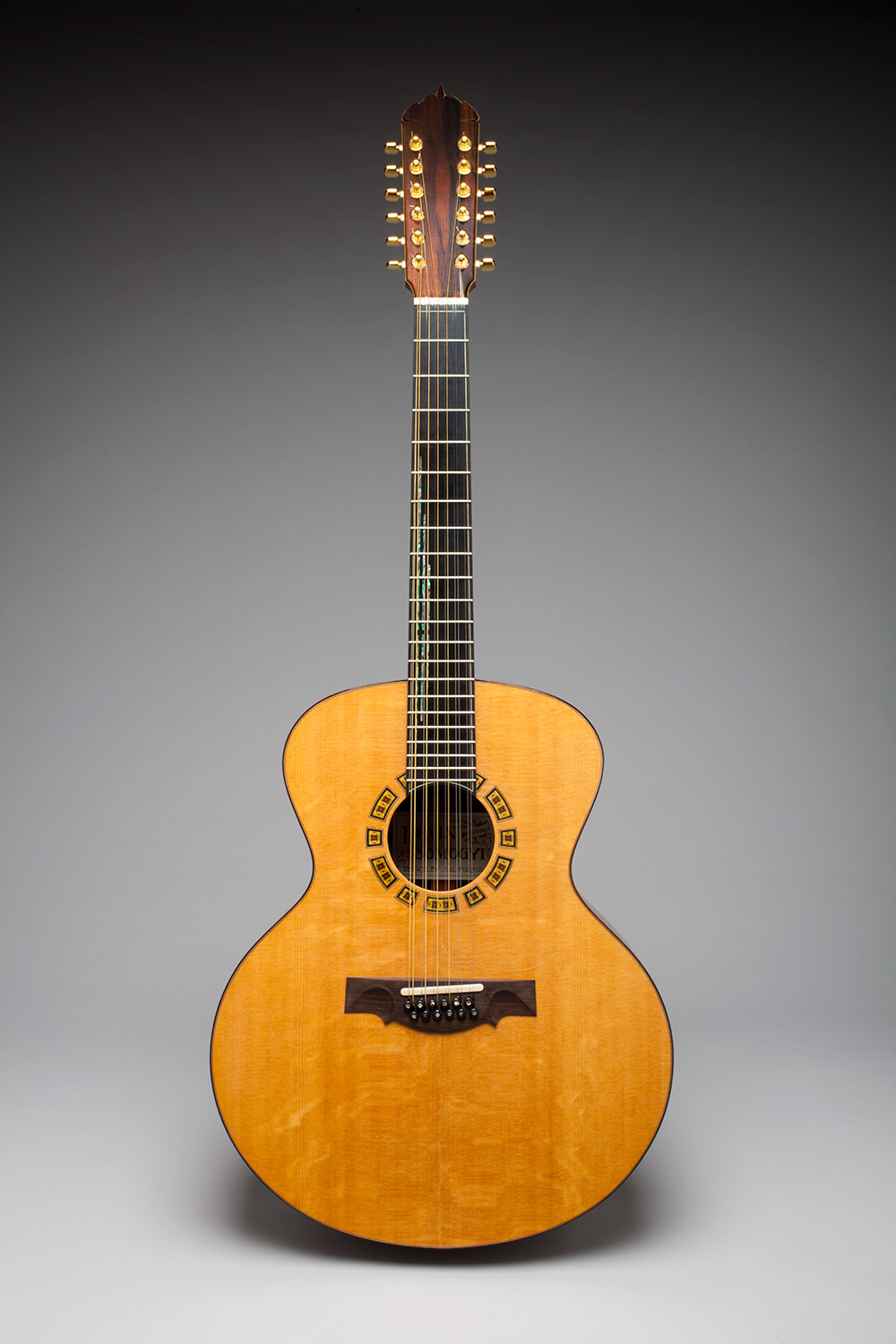 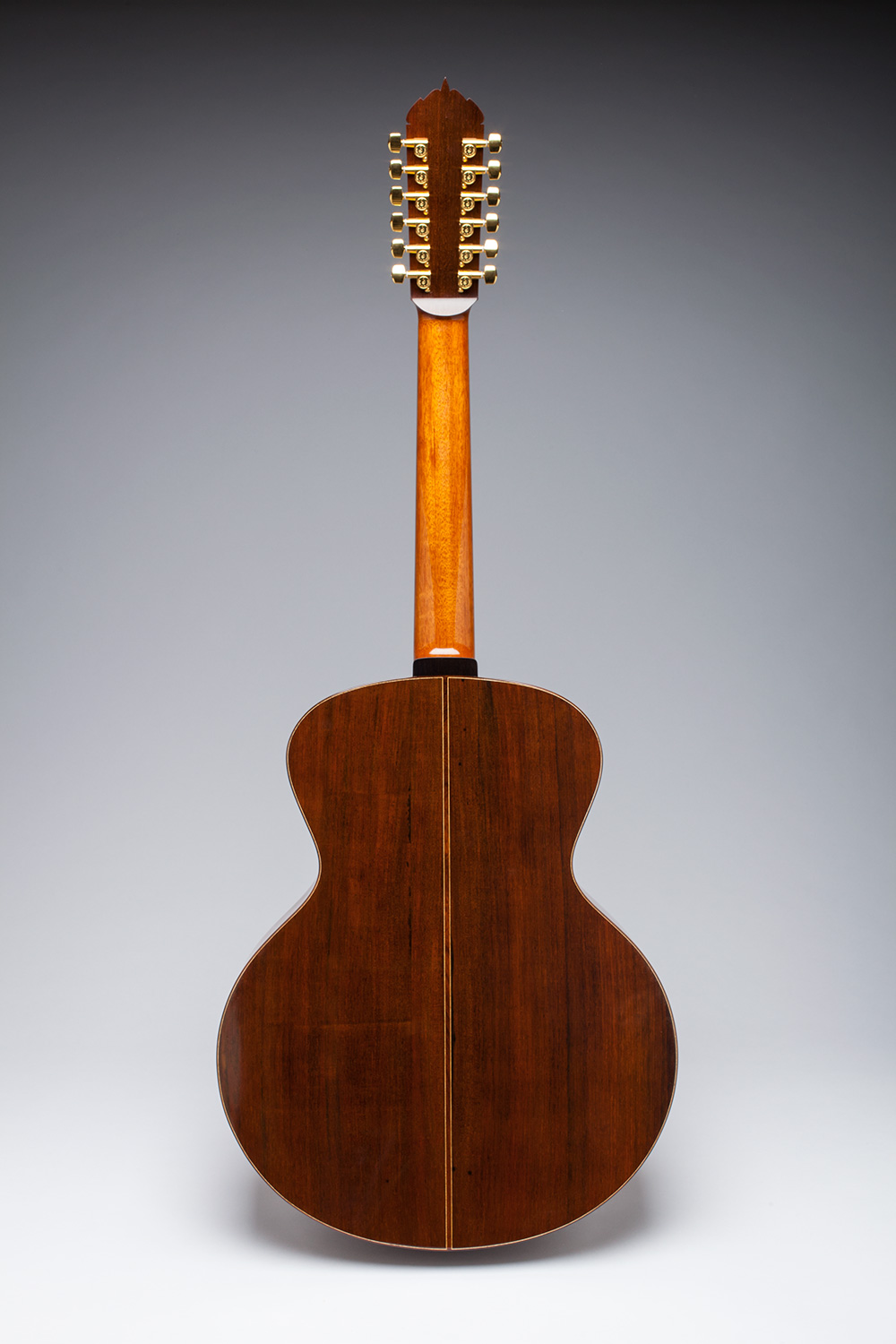 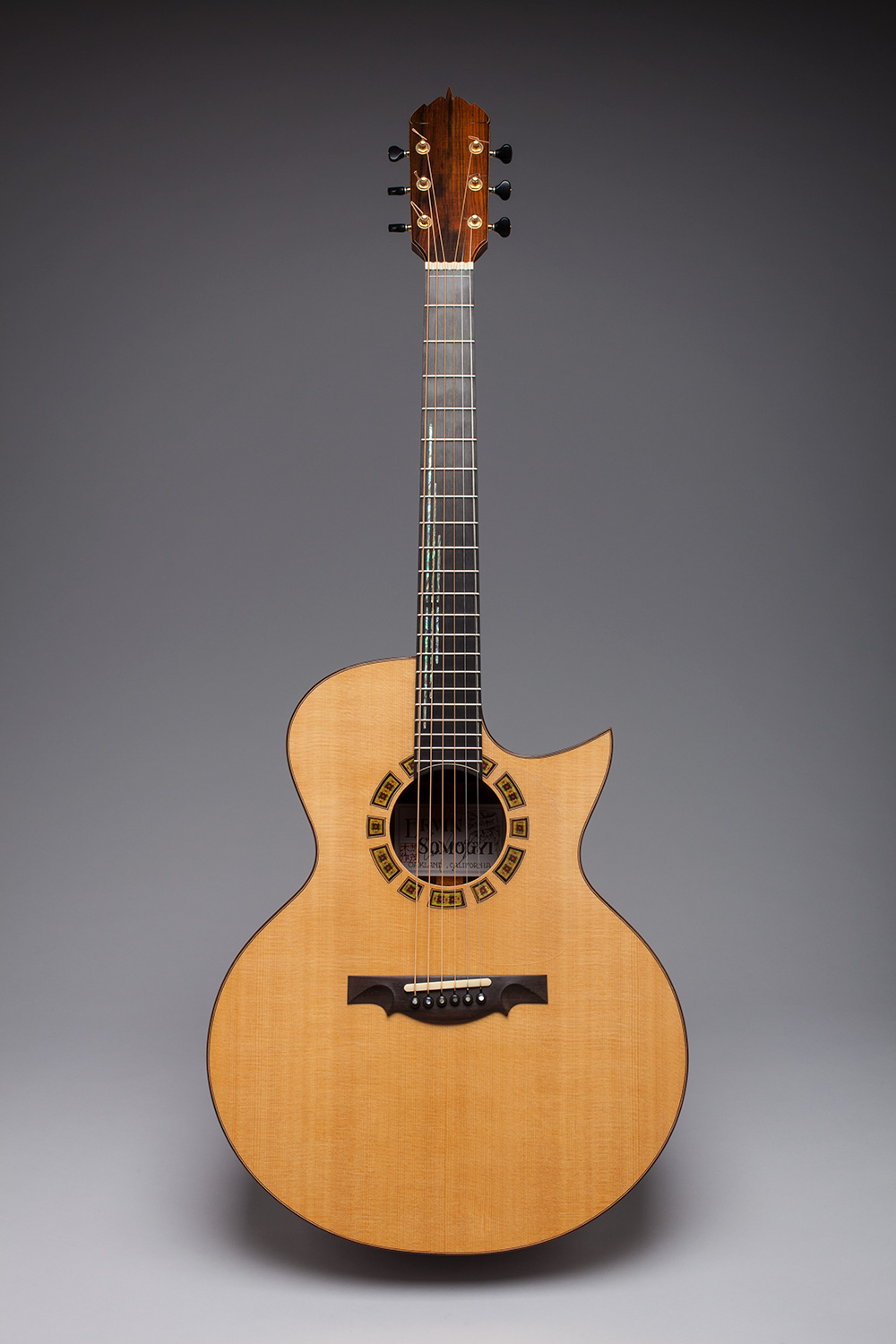 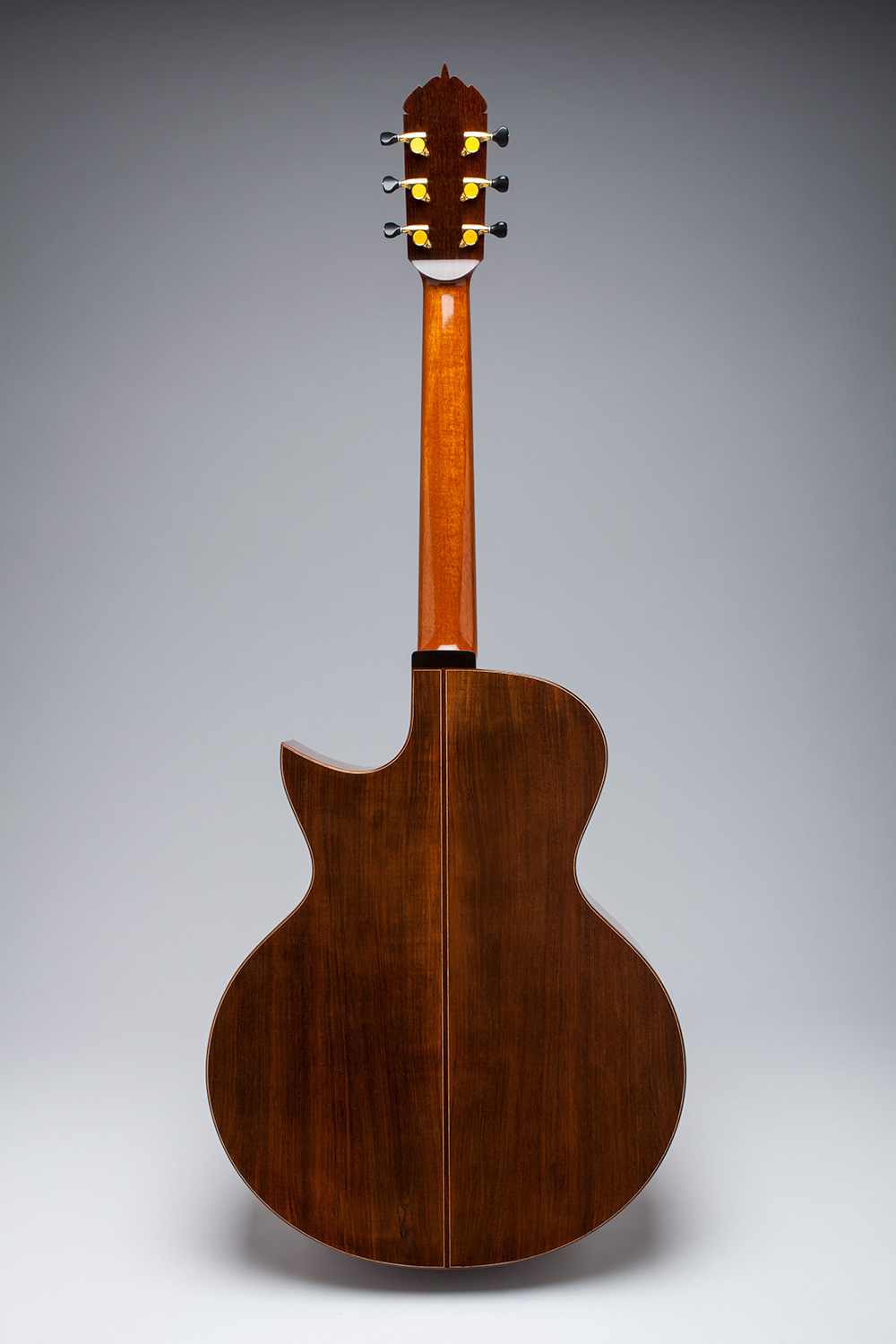 The Jumbo guitar is the largest commercially available guitar body.  I make two sizes of it; the first is for the six-string version; the second slightly larger one is for the 12-string version.  It can be made in both 12- and 14-fret versions. 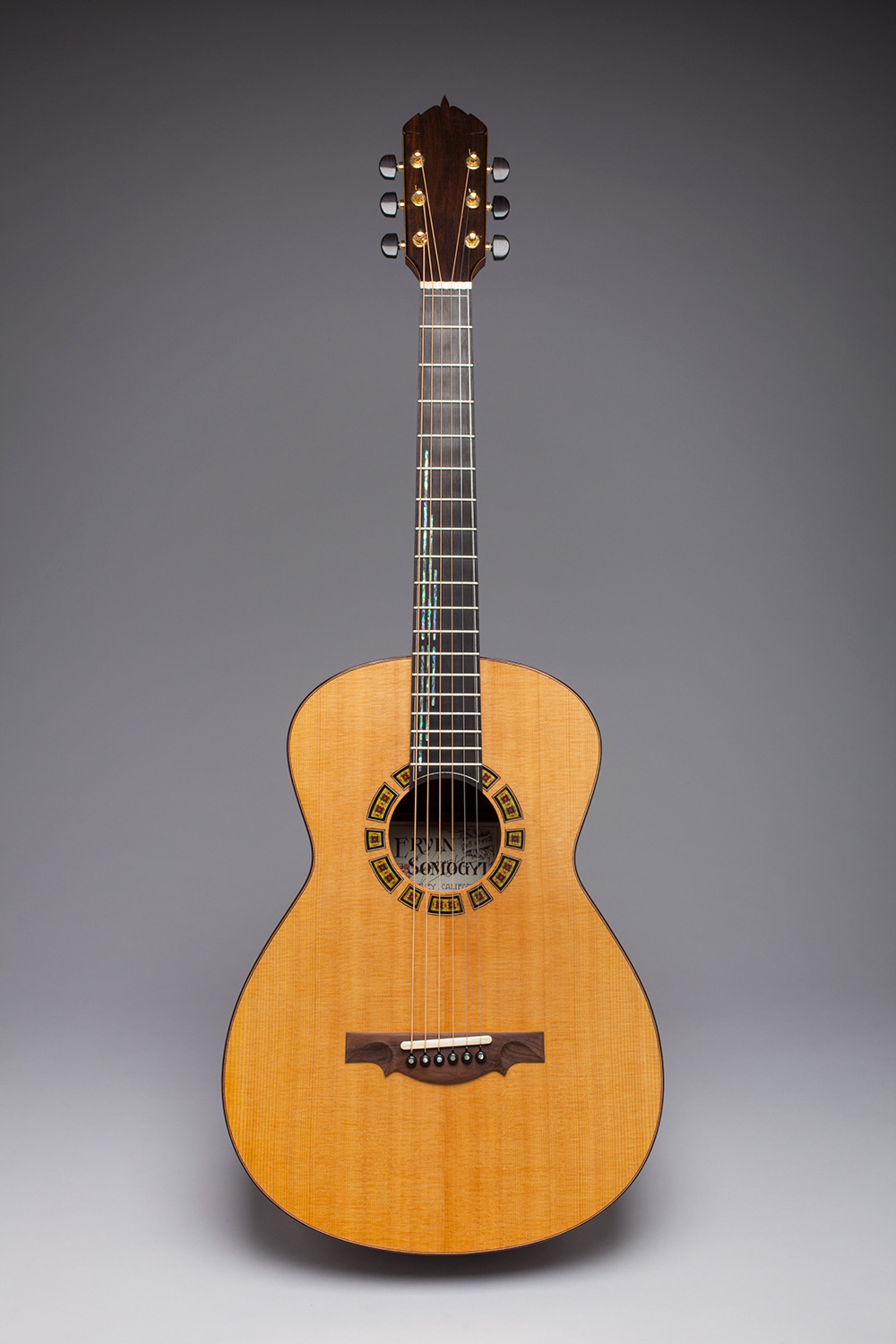 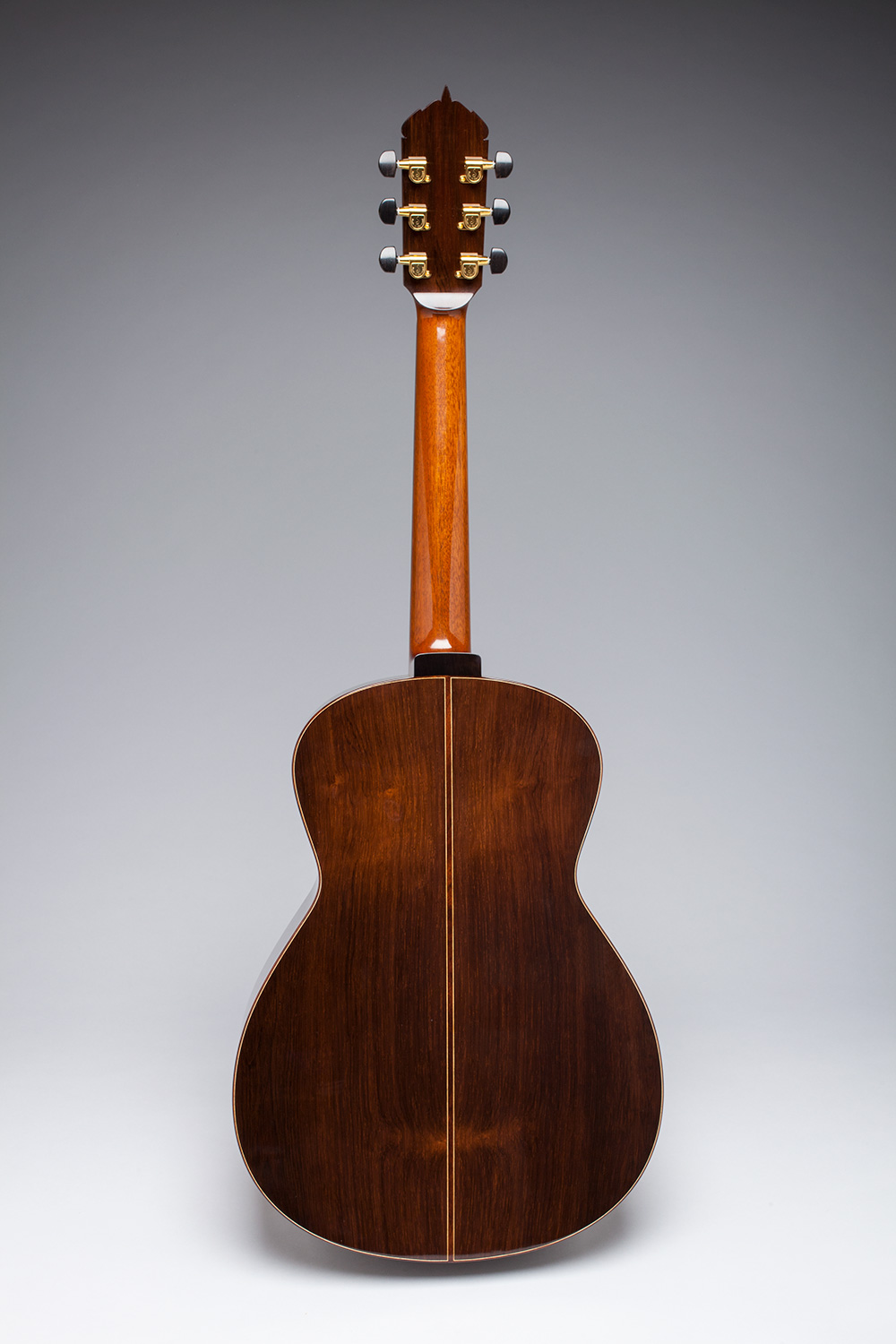 The OO is my streamlined and visually improved version of the standard small-bodied OO guitar.  It can be made in both 12- and 14-fret versions.

I can also make the yet smaller Parlor and O guitars, or pretty much anything one might want.  I’ve made one-of-a-kind shapes for clients who have desired such a thing or need some particular ergonomic feature.  Such considerations add to the cost of a project, as I probably have to create new molds, templates, jigs, other infrastructure — and of course a custom-fitted case.  They can, of course, be made in both 12- and 14-fret versions.

Finally, I make good Classical and Flamenco guitars, despite the fact that I am much better known as a steel string guitar maker. 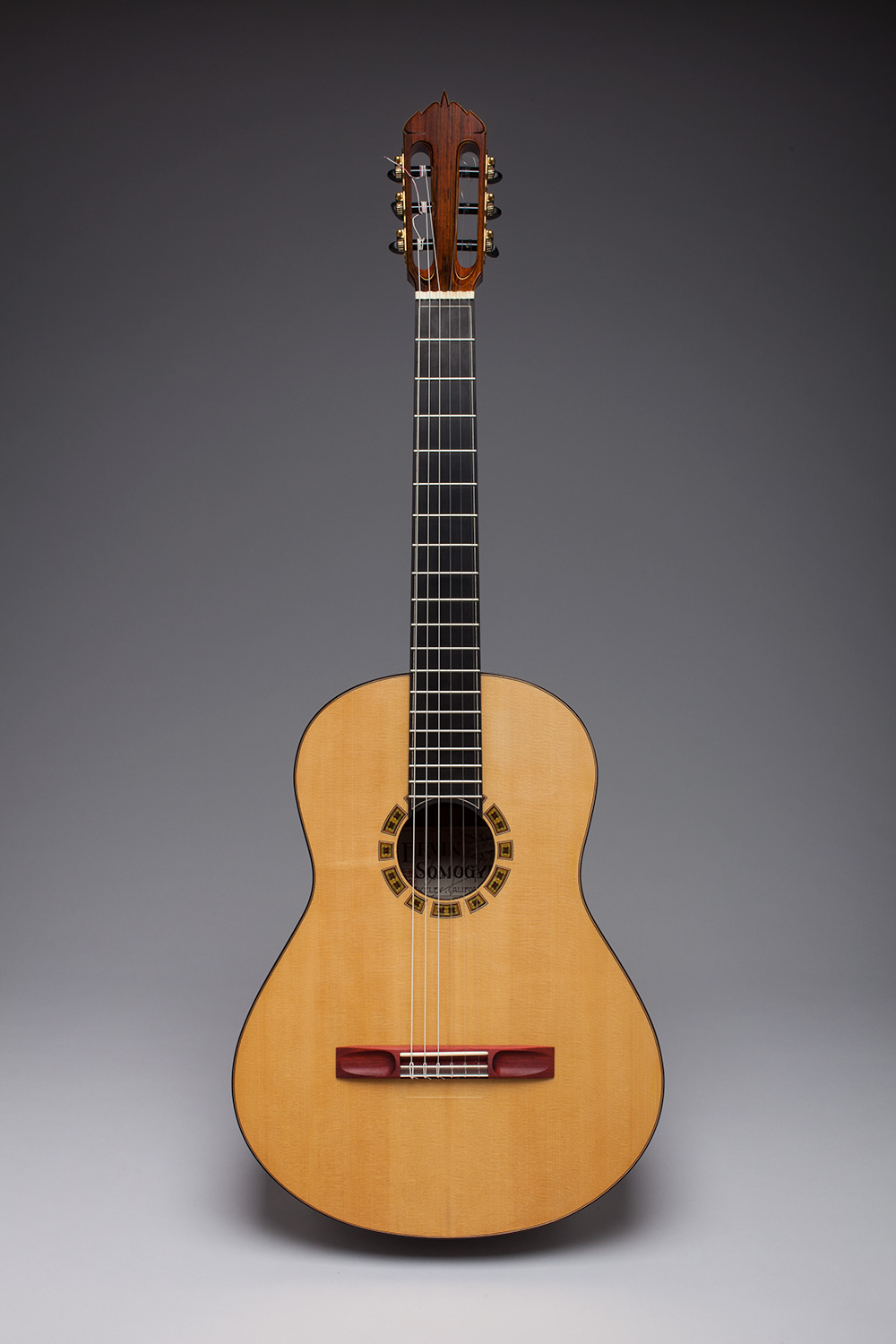 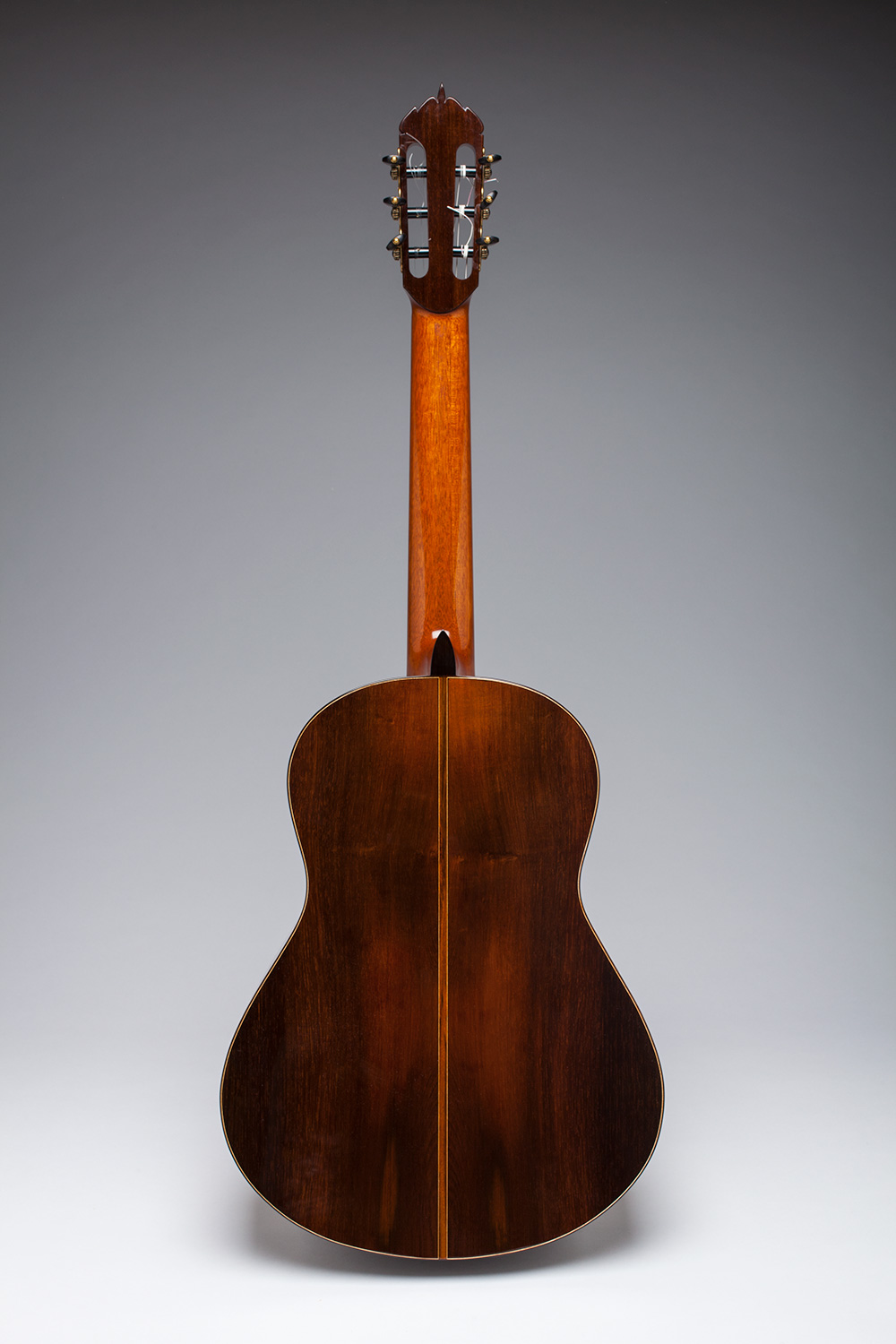