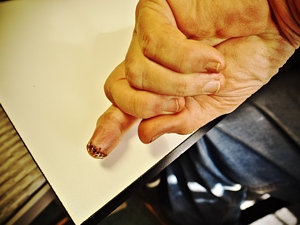 I cut my finger on my table saw, in a moment of carelessness. (Duh!) It of course happened at the end of the day, at the end of a run of cutting and slicing, and I’d allowed my mind to wander just a little bit. . .

I must say that I’m glad that I have a SawStop, which is the table saw that has an shutoff relay that kicks into action the instant a finger (or anything with a finger’s electroconductivity) comes into contact with the blade. Had I not had this tool the cut would undoubtedly have been much worse… and a life-changer for someone like me who uses his hands and fingers with precision.

The story behind the SawStop is that, a few years ago, the inventor tried to interest the commercial table saw manufacturers in making this tool; but every single one of them turned him down, citing concerns of too-great cost. So he went into business for himself. Statistically, I’m told that 30,000 fingers are lost annually to power tools. One of them might have been mine; I’m lucky to have only needed stitches. For those of you who don’t have such a table saw… do think about getting one.

There are currently reports of woodworkers suing the makers of their table saws because they did not install such a useful safety device on their machines when there is/was such technology easily available. Somehow, I’m on the side of the woodworkers on this one, caveat emptor be damned.