I try to stay away from the news these days.  The lies and lying really get to me.

Speaking of lying, there was a t.v. series called Lie To Me, starring actor Tim Roth, a while back.  He played an expert in reading body language and facial expressions, who was brought in to solve a crime or mystery when something really bad had happened.  Roth figured out who the bad guy was by interviewing people and following out those kinds of facial and postural clues.  It was an interesting show; particularly because in explaining how various body and facial tics indicated lies, photos of various real politicians’ faces (when they were being interviewed, questioned, or just speaking) were used in illustration.  My God but our leaders are brazen and mendacious.

Having mentioned actor Tim Roth, I want to say that he starred in one of the best movies I’ve ever seen . . . and that no one has ever heard of.  I found it by accident surfing channels late one night.  It’s titled “The Legend of 1900” and, as I said, nobody has ever heard of it.  But it’s a GREAT movie.  It’s about a piano-playing prodigy who is born in the year 1900; it’s basically a romance, but without any actual romance — and with a cameo by actress Melanie Thiéry, who is one of the three most achingly beautiful females who have kept their clothes on that I’ve ever seen on a screen.

The musical high point of the film is a sequence in which the famous Jelly Roll Morton (“the Father of Jazz”) challenges the Tim Roth character to a public piano-duel.  That sequence is to die for.  Give yourself a treat some evening and watch this gem.

On a different level entirely, I want to show you an image of my “Diospyros” guitar.  Diospyros is the generic name for ebony, and this guitar is made up of lots of ebony tiles mixed in with contrasting tiles of Yellowheart wood.  Overall, the pattern looks a bit like all the Midwest farmland that one flies over and sees if one looks out of the airplane window; or, on a different scale, a stylized version of the fitted-together-cobblestone streets one finds in Mexican towns. 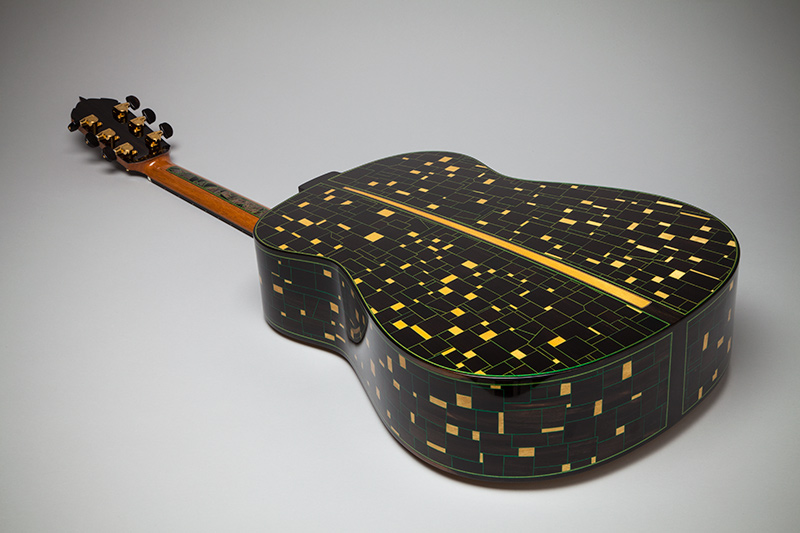 This guitar was, in fact, inspired by exactly that: the appealingly geometric look of the fitted-together cobblestones one can see on Mexican streets.

There’s a bit of a story behind this, of course.  Part of that story has to do with how I notice, and get distracted by, the visuals in the world around me.  I notice patterns, colors, textures, proportions, disproportions, continuities and discontinuities of line, evenness and unevenness, and all kinds of beauty in things no one else seems to notice.  Textural stuff REALLY grabs my eye.  This propensity really gets in my way when I’m trying to get anything done; so I try to hide when I’m working so as to get away from interruptions.  Interruptions REALLY kill my focus and concentration.

Anyway, I was in a relationship with a woman some years ago.  As I was married at the time it was, technically, an adulterous relationship — although my wife knew about it and really didn’t care.  The marriage had, how should I put it, passed its “discard after . . . “ date.

This lady and I went to Puerto Vallarta for a week’s . . . uh  . . . romantic getaway.  Puerto Vallarta has long ago been converted into a tourist trap and is not nearly so pleasant a place in which to spend time as the travel industry might want you to think.  The tourist hotels are about a mile out of town and isolated from the riff-raff. Those resort buildings are magnificent, impressively large, and soulless. They also jettison an awful lot of sewage directly into the ocean, not far from the town.  Charming, that.

Puerto Vallarta is picturesque but has the scuffed and worn look of something that’s fallen on hard times.  It’s right on the ocean; but the beach sand itself is a shockingly narrow strip . . . and it’s brown and looks dirty; it looks like a brown sugar truck had a major spill there.  (The tourist hotels, in contrast, had imported tons of white sand that really does look nice, although the overall effect is that of an incongruous patch of white off in the distance, in the middle of an otherwise brown landscape.)

The main industry in the town is tourism, of course: the stores, restaurants, tours, crafts objects and imported merchandise, street vendors, etc. are all geared to that.  (The crowning touch is that in order for the government to protect its tourist income, Puerto Vallarta is policed by soldiers from a nearby army facility who are armed not with pistols and rifles, but with machine guns.)

It was during this romantic getaway that I found out that I didn’t really like the woman I was with.  She was . . . well, let’s just say that we were appallingly mismatched.  It was sort of like going on a romantic hideaway trip and discovering that your partner is a transvestite.

This lady was smart, attractive, and, among other things, a competitive scrabble player.  For months, she beat me every time we played.  I didn’t really mind; I like words and playing with words, and I didn’t have anything riding on whether I won or lost.  And, in any event, the more we played the better I got and the closer the gap between our scores became.  We took the scrabble set down to Puerto Vallarta and it was while we were down there that I beat her at scrabble for the first time.  MAN, WAS SHE PISSED!  Outraged, in fact.   And she had a major tantrum.  Such . . . uh . . . misbehavior for such a seemingly trivial reason . . . well, it was pivotal for me.  The relationship went quickly downhill after that.

In any event, after that tantrum, rather than to hang out with her, I walked around Puerto Vallarta a lot.  As I walked, I noticed beautiful visual patterns and textures everywhere.  I hadn’t quite realized until that week how much these things impinge on me; but IT WAS VERY PLEASANT for me to simply walk around and see the sights.  I looked at wrought iron work on the houses, the colors of the buildings, the cobblestoned streets, iguanas for sale, etc.  I learned a bit about Puerto Vallarta itself, too.

For instance: there are insect in that region that live in hidey-holes at the bottoms of small craters that they make in the dirt; if you go out of town you’ll see lots of these little conical craters in the soil.  These “V”-sided craters are about the size of a walnut, and their sloped sides are lined with VERY FINE sand.  Being fine sand, these craters are a lighter color than the surrounding dirt, and are therefore not hard to find; but of course insects don’t care about color.  Anyway, when another insect walks into one of these conical depressions the sand all around is so fine that it cannot get its footing and it slides down to the bottom of the dip; then the insect jumps out of its hole, grabs the unsuspecting victim, and eats it.  This predator is called a “Lolita” by the locals, by the way.

Who knew Puerto Vallartans were so literate? Anyway, it was fun to look and learn.

Fast-forward some years. I came into possession of a coffee-table book titled ARTEFACTOS, which has lots of photographs of arts and crafts artifacts from Latin America.  One of the photos was of a beautiful cobblestones street of the kind I’d seen in Puerto Vallarta, where squarish and rectangular-ish stones (rather than more rounded or oval ones) were fitted together.  Wow.  That image just jumped out at me.  And I filed that away as something that I could do something with at some point.

Fast-forward a few more years to when I had a hankering to make a guitar for myself — for no other reason than that I wanted to do something different from all the usual stuff. Enter the idea for the Diospyros guitar. The attached image is of this instrument.

I have to tell you that carrying this project out was VERY time consuming . . . but I didn’t really mind.  Just like losing at scrabble.  I was chasing something new simply because I really wanted to do it.  And I could. And eventually the Diospyros guitar was completed.

The thing of it is: it probably never would have been made had I not disliked that girlfriend as much as I did and stumbled on the otherwise invisible beauties of Puerto Vallarta.  (I mean, who ever goes anywhere to look at pavement?)  I have to tell you that in a weird way I feel indebted to her; the Diospyros came about, in part, with her unwitting help.  I have more than once been struck by a philosophical sense of how an irritant can ultimately become a pearl.

Speaking of “philosophical”, I had a Mondegreen experience with that word some years ago.  A Mondegreen is a mishearing of a lyric or poetic line in which one imagines that something quite different has been said.

The Mondegreen originates from a Scottish ballad where the hero of the narrative is slain . . . “ and . . . [they] laid him on the green”.  Someone heard that as  “. . . and Lady Mondegreen” instead . . . and thus Mondegreens were born.

Anyway, when I was in High School there was a popular Harry Belafonte song called “Island in the Sun”.  It’s a Caribbean tune that goes:

This is my island in the sun

Where my people have toiled since time begun

Though I may sail on many a sea

Its shores will always be home to me

Oh island in the sun

Hailed to me by my father’s hand

All my days I will sing in praise

The song goes on to the phrase  “. . . and Calypso songs philosophical . . .”    And that’s when I Mondegreened.  I thought Belafonte was singing “Calypso songs full of Soffy Cal”.  I couldn’t figure out what Soffy Cal was.  For years I thought it might be some exotic Caribbean substance.

O.K. I’ll clam up about that now.  It’s just getting too nacreous and chatoyant around here.